Well, I now believe more than ever it was indeed a Townsend's Warbler! Just this weekend one showed up in SW Ontario east of Detroit, and another appeared near Chicago. More amazingly, just as I suspected, the location was exactly where one was found on April 30, 1994 (i.e., along Lac Qui Parle Co Rd 33, 1.8 miles N of the Lac Qui Parle State Park entrance)!

But even though the very brief view a few of us had wasn't conclusive enough, and we were unable to relocate it in that thick cover, we still came up with 13 other warbler species. Of these, 11 of them were on Sunday in that 1.8-mile stretch between the state park and the alleged Townsend's site, and it was nice to hear all 13 of them singing at least once. Certainly all those warblers – and thrushes! – were blown in and grounded by that large and powerful weather system which prompted us to abandon our plans to look for ducks and shorebirds. Instead, with passerines abounding at almost every stop, I think we made the right move by looking for woods birds and turning up no fewer than 120 species in the process.

Some other nice finds: a total of 3 Peregrines, that exceptional view of a Sora, a much better view on Sunday of those golden-plovers, an out-of-range gnatcatcher, the always uncommon Lark Sparrow, 8 Harris's Sparrows in one tree, and – my personal favorite – that Savannah Sparrow that tried to fly across the road in front of Julie's van, flapped furiously into the wind, almost reached the other side, got blown backwards to where it started, and all the while it kept facing the wind and flapping hummingbird-style in reverse.

How bad was the weather? On Saturday, the winds were 21-36 mph, with gusts up to 46; on Sunday, it was 23-45 mph winds, with gusts to 56! Nearly an inch of rain fell on Montevideo Saturday, and on Sunday there was more than an inch and a half. Sorry all that wind and rain drove a few of you home early, and I certainly don't blame you for leaving, but you'll note below there were some interesting birds on Sunday you missed out on, and the weather wasn't nearly as bad later in the day.

Western Grebe (only one, on Marsh Lake)

Great Egret (why so few?)

Red-tailed Hawk (why so few?)

Peregrine Falcon (3 seen in all)

Least Sandpiper (Sun; seen by Ron with the Pectorals)

Blackpoll Warbler (early; this and the Mourning were in Chippewa Co, the only 2

warblers not in that 1.8-miles on Sunday)

Harris’s Sparrow (incl 8 in one tree)

White-crowned Sparrow (why so few?)

Note – Because of the interest in these two counties, this MBW consisted of two Lac Qui Parle County MBWeekends, on May 10-11 and May 12-13, a Yellow Medicine County pre-MBW on May 11, and a Yellow Medicine post-MBW on May 14. This allowed additional persons to be confirmed and for more areas to be covered during the five-day period. As a result, no fewer than 166 species were found in all, including some interesting rarities – e.g., Cinnamon Teal, Common Gallinule, 21 shorebird species (including 2 American Avocets and 3 Hudsonian Godwits), Snowy and Cattle egrets, 2 White-faced Ibis, LeConte's Sparrow, and 2 Eastern Meadowlarks. (On the other hand, the passerine migration was relatively slow, as only 15 warbler species were found.) My thanks as always to Craig Mandel who led Lac Qui Parle MBW I, and to Ken Larson and Garrett Wee for their tips on the White-faced Ibis and Cinnamon Teal.  –KRE

Other than some temperatures in the low 40s, the weather cooperated for us on this two-day MBW, since the rain either came at night or stayed to our south. Our total of 126 species was fairly respectable, with some nice numbers of warblers at Cory Lake WMA and Lac Qui Parle County Park. But many of the usual locations for shorebirds (e.g., Salt Lake) were full of water, so we spent a lot of time searching for locations that held shorebirds. Haydenville WMA was one of the better locations, along with the flooded field south of Louisburg where there was a pair of American Avocets. Some other locations of interest were: Sweetwater WMA, where we observed a single Snowy Egret; Florida Creek WMA held a number of American Bitterns and sparrows, including a Lark Sparrow; Madison Lake WMA was great for waterfowl (including over 300 Ruddy Ducks); and CR 36 near the town of Rosen was also good, with 3 Cattle Egrets present on Friday (found the day before by the Lokens) – and chased around by a young Bald Eagle!  – Craig Mandel (with edits by KRE)

As Craig's group was completing the second day of the first Lac Qui Parle MBW, my group was doing the first of two single-day trips in Yellow Medicine Co – with a bit of Chippewa Co on the side and a healthy dose of Lyon Co at Lone Tree Lake. Our first productive area was along 306th Ave (a back road along the Minnesota River leading into Granite Falls) where we heard – but could never quite see – an unexpected LeConte's Sparrow, followed a short time later by an equally surprising and singing Eastern Meadowlark. (And both birds stayed around for the post-MBW on Monday.) After a couple of mostly unsuccessful searches for warblers along the river, Lone Tree Lake was next and its shorebirds did not disappoint. Even though the Curlew Sandpiper had departed two days before, we were content to see 12 shorebirds there (we later added species #13 elsewhere) along with two late-lingering Greater White-fronted Geese. The afternoon was spent in the scenic Coteau des Prairies country west of Canby, but the cool and overcast day seemed to have dampened most bird activity. At least we came up with an even dozen warbler species for the day, and on the way back to Montevideo a stop at Miller Lake yielded Horned, Eared, and Western grebes to bring our day's list to 112 species.  – KRE

We were still in Chippewa Co not far from Montevideo, and this second Lac Qui Parle MBW had just begun when Kathrynne spotted one of the best birds of this five-day MBWeekend – a Common Gallinule in a marshy slough just east of the Minnesota River! And eventually there was much more in and around Lac Qui Parle that day and the next, as my group came up with 141 species – more than Craig's MBW total, but keep in mind they scouted out some sites and species for us. After the gallinule, most of the places we tried that morning for woods birds only produced modest results, but things picked up in the afternoon as we relocated the avocets (nesting?) in the flooded field south of Louisburg, and one Cattle Egret was still in the pasture by Rosen. The birding improved even more on Sunday when we found a singing Eastern Meadowlark, a fly-by Sandhill Crane, and a handsome Hudsonian Godwit all along CR 12. The Snowy Egret seen by Craig's group on this road was a no-show, but a nearby spot produced an Orchard Oriole a late Red-breasted Nuthatch, and we ran into Ken Larson at the Haydenville shorebird spot. He had just found a nearby White-faced Ibis on CR 14, and as we watched the ibis most of us decided there was time after lunch to look for a Cinnamon Teal found that morning by Garrett Wee's MOU field trip in Big Stone County. Indeed, it was still there (!), and en route back to Montevideo a few of us drove the Big Stone NWR auto tour and found a Scarlet Tanager, Lark Sparrow, and an amazing concentration of 1,100+ Black Terns.  – KRE

This second one-day effort in Yellow Medicine Co could be considered somewhat better than the first, even though we had one species less (111) and some rain eventually prompted us to call it a day by mid-afternoon. The LeConte's (still heard-only) and Eastern Meadowlark were still there along 306th Ave, and this time the south end of Lone Tree yielded 13 shorebird species: the same 12 as on Friday plus a Ruddy Turnstone – and there was even a White-faced Ibis wading among them! We then followed up on a tip from Garrett Wee to try one more spot in Lyon Co where a Summer Tanager had been the previous day at a feeder. But the tanager had moved on and was not seen that day, although a screech-owl was heard back in the farm grove and a pair of Red-headed Woodpeckers was nesting. We were back in Yellow Medicine for lunch at Ooras County Park, but the nice woodland there had little of note except a couple of gnatcatchers. Indeed, we only managed to find 8 warbler species for the day, but before the rain did us in entirely we made up for the relative lack of warblers by chancing upon two nice flooded fields. One had two close-to-the-road Hudsonian Godwits, and the other hosted handsome Black-bellied Plovers, a non-breeding-plumaged American Golden-Plover, some more Ruddy Turnstones, plus Dunlins, Short-billed Dowitchers, White-rumped Sandpipers, and others – and we ended the day with 16 shorebird species.

one of 21 species seen on the MBW (KRE photo)

A handsome Blackpoll Warbler portrait; one of 15 warbler species 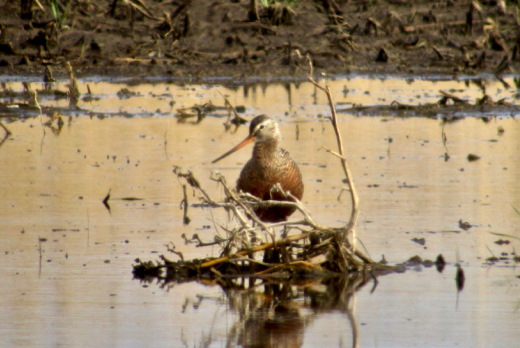 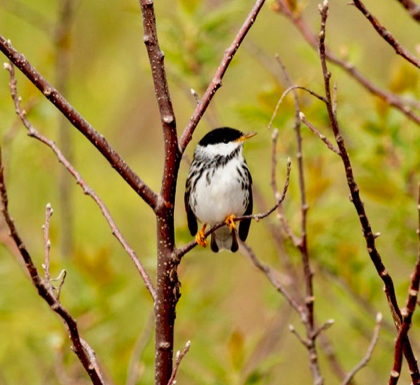 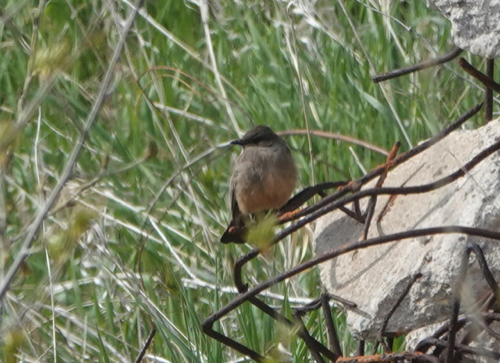 Well, it was colder and windier than we expected (especially on Saturday and part of Sunday morning). So, what did you expect? This was spring, and we were out in the prairie, and bad weather is par for the course out there. But I think we managed to do better than expected on this Ortonville-based MBW, considering that so far this has been a generally disappointing spring migration statewide. In all, we had a respectable 127 species during our Friday noon - Sunday noon effort.

Most of the waterfowl had passed through on schedule in April, but there was still a decent variety of ducks around, plus a late Greater White-fronted Goose. We did OK on shorebirds as we listed 14 species, since there was plenty of mud around the edges of the potholes (it’s been a dry year), and both Marsh Lake and the Big Stone NWR auto tour pool have been drawn down. Unfortunately, the auto tour is closed for construction so we never made it in there, but shorebirds were visible at the dam (damn?) end of Marsh Lake were we found several American Avocets and Marbled Godwits, some Short-billed Dowitchers, and a Willet. A Peregrine happened by, too, in hot but unsuccessful pursuit of an avocet. (We were mostly unsuccessful, as well, trying to determine with any confidence where these birds were – Big Stone, Swift, or Lac Qui Parle? But since we were all fully vaccinated, the county listers had attained herd immunity from making any listing mistakes.)

In addition to the Peregrine, other raptors made a good showing. A Harlan’s-type Red-tailed circled low overhead at Big Stone NWR, 3 late Rough-leggeds migrated over the refuge the next day, and both Broad-wingeds and a Swainson’s were spotted on Sunday. Of course, the highlight was the pair of Say’s Phoebes found near Odessa on Saturday that we relocated on Sunday. Among the sparrows, we found Lark Sparrows at 2 places, several Harris’s, and an uncooperative Eastern Towhee heard by some.

We managed to turn up 10 warbler species (8 of these on Sunday), which is pretty impressive considering that no one has reported any waves yet in the state – and note that the field trips to the alleged warbler hot spots of Frontenac/Hok-Si-La apparently managed only 11 species on this same weekend! The best of our finds was a singing male Northern Parula that came down close to eye-level for all to see; earlier, a Black-throated Green was heard singing at another spot.

As always, I thank you all for coming, with special thanks to Jean who was on her first MBW – whom I had not seen since she used to come on my BIrd ID classes in Duluth in the 1980s.