Starting out the MBW birding in the southern part of the county proved to be very productive, with the highlight for most being the very cooperative Le Conte's Sparrow. A close second would be the first-county-record Least Bitterns that were briefly seen but at least heard by all; these were found by Herb and Ron while scouting on the 19th. The mix of waterfowl at the Pine City sewage ponds was also impressive, with 13 species observed there including a nice look at a male Greater Scaup [unusual anywhere in summer in MN -KRE]. Our afternoon got both interesting and confusing, when the group received information on a second-state-record Wood Stork, which was found in Faribault County about 200 miles southwest of us. After much discussion, four MBWers headed down to relocate the bird – which they did, and others in the group followed suit on Saturday and Sunday. (I believe 12 of the participants were eventually able to get down to see it.) For those who chose to stay and continue birding in Pine County, we added some nice birds at St. Croix State Park, including Black-billed Cuckoo, Yellow-throated Vireo, and some more warblers. Later in the evening over in Aitkin Co we made an unsuccessful try for Yellow Rails, but most of the group were able to get OK looks at some Nelson's Sparrows.

This day of birding started out with a run west of McGregor and up Aitkin CR 5 plus some time on Aitkin CR 18, before we returned to McGregor for lunch, when four of us headed south for the Wood Stork. Accordingly, Kim came over from Duluth to lead the afternoon portion of the trip, searching for birds in a place signed as a "Fire Zone" (i.e., Rice Lake NWR). After the fire danger was over and I dared to return from Faribault Co, there was another unsuccessful listen for Yellow Rails, with some of the group staying out past 12:30 am. [There are nights when Yellow Rails (along with Nelson's and Le Conte's Sparrows) remain silent for reasons unknown. But it's also possible there are no rails this year in McGregor Marsh, possibly due to high water levels, and this species seems to have become less reliable in this famous marsh in recent years. -KRE] Some of the highlights from the day were great looks at Le Conte's and Nelson's sparrows, an unexpected singing Henslow's Sparrow along CR 5 [quite unusual in NE Minnesota - KRE], lots of warblers, and the group also had some nice views of a cooperative Great Gray Owl hunting along CR 18 at dusk.

Our final day was really only a morning, but even with only a half day we were able to add a number of birds to the trip list, plus even a lifer sewage pond (Floodwood) for some. We spent most of the morning along Headbom Forest Road which runs through a nice mix of habitats, and here we were able to add some warblers and flycatchers to the list.

Wood Stork - in Faribault Co, and #360 on the all-time MBW composite list!

Dickcissel - in Faribault Co during the stork trip

Our one-day trip to Isanti and Kanabec counties turned out very well. We observed 93 species in the two counties, with American Bittern, Golden-winged and Pine warblers, and Lark Sparrows being a few of the highlights of the day. Our evening at McGregor Marsh was a little more difficult, with only one Yellow Rail calling from about 1/2 mile south of Highway 210 and too far from Highway 65 for some to even hear. There were also distant Nelson's Sparrows heard here and in the marsh behind the Country Meadows Inn. But our time spent in Aitkin County was great, with nice looks at 16 species of warblers, including cooperative Connecticut, Mourning, and Canada warblers.  - Craig Mandel

Not only was the Yellow Rail heard on Aitkin I no closer to the road on Saturday night, but it had to be even farther away on Aitkin II, as it was barely audible to even those with good hearing. Undoubtedly, all the recent rains pushed the rail(s) to shallower water far from the corner of Hwys 210 & 65, where they had been within reasonable walking distance the week before. And, unfortunately, it was no great surprise that the Nelson's Sparrows heard on Aitkin I were silent 2 nights later – there are simply some nights when these birds (and Yellow Rails, for that matter) are present but refuse to utter a sound.

Still, I'd say the rest of this second Aitkin County MBW was a success, as we managed 7 more species than the Aitkin I group, with several birds among the highlights. A Sharp-tailed Grouse flew in and landed on County Road 5 between vehicles 3 and 4 of our car caravan. Later on this county road an American Bittern did the same thing (!), and in between on the same stretch of road a most responsive and cooperative Le Conte's Sparrow posed for photos on roadside shrubs.

But not all our highlights were limited to County Road 5. Especially surprising was the Yellow-billed Cuckoo – relatively rare in this county – which flew into a shrub along a back road south of Palisade. (And later that morning a Black-billed turned up along County Road 18.) Equally rare here is the Least Bittern, but one called in mid-afternoon at close range at French Lake WMA, though it refused to emerge from the marsh.

We also found 17 warbler species in all: although the Connecticut seen on Aitkin I was a heard-only bird for us, and we did not find Craig's Canada Warbler, we came up with Northern Parula and Black-throated Green. Finally, and appropriate for the season, it was nice to find a Wild Turkey with 2 young, an active Osprey nest, a pair of Sandhill Cranes with one colt in McGregor Marsh, a short-tailed juvenile Black-billed Magpie, and an entertaining pair of baby Northern Orioles in the nest at Palisade.   - Kim Eckert

bird heard-only on A2) 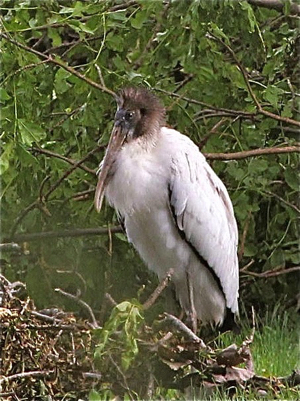 (The good ol' days at McGregor – when you could actually see one!) 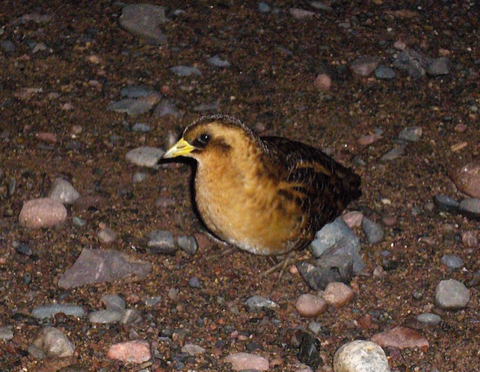 following the summary of the 2017 MBWeekend

As with most one-day MBWs, you can never cover the entire county in a single day, but we did get to see some good locations in the western part of Carlton County. Some of the highlights included the Winter Wren, which was finally spotted by Linda out in the open; it was also nice to hear its song and watch it sing. Spirit Lake Road produced some birds of interest, including Blue-headed Vireo and 10 species of warblers. Our last stop in the Cloquet Forest State Game Refuge was fun, where we were able to see and hear a Pine Warbler along with a half a dozen other species of warblers.

Today we spent the day birding in Aitkin County and very could have spent the entire day on CR 5 and CR 18. Some of the birds observed there included Wild Turkeys, Black-billed Magpies, 10 species of warblers, a close observation of a Le Conte's Sparrow, and we heard a Yellow-billed Cuckoo. A new spot for most of the group was the Sandy Lake Recreation Area, where we added Osprey, Eastern Towhee, and some immature Yellow-rumped Warblers. We ended the day at Peg & Lon Baumgardt's house, where we were treated to a great dinner prepared by Peg and even added a few birds while eating on their deck.

With no birds to chase in Faribault County this year [as was the case in 2014, when Craig made a detour to see a Wood Stork! – KRE], we decided to start the day out at midnight. A few participants joined me, to give the Yellow Rails another try at the McGregor Marsh. Unfortunately, the rails were silent, though we heard a number of Virginia Rails, Soras, and Nelson's Sparrows. But we could not turn up a Yellow Rail [even when present, for reasons unknown, there are nights when these rails do not vocalize – KRE]. Later that morning we headed to Rice Lake National Wildlife Refuge, where we found some American Wigeons with young, Double-crested Cormorants (a highlight for a few of the county listers in the group), American White Pelicans, and a pair of nesting Olive-sided Flycatchers.