Despite our various ailments – Bernice’s bad back, Suzanne’s bum leg, my injured hand, and even Pete’s defective tripod head – we managed to come up with a most successful California trip. Of course, it was easy enough to forget our aches and pains with such pleasant weather while we were there, as the highs ranged between the mid-60s and low 70s each day. And consider all those birds we came up with as we had our highest species number ever for this MBWeek: a grand total of 204 officially, plus 2 “non-countable” parrots, Around 80 of these were non-Minnesota birds (i.e., absent, accidental, or casual in the state), and everyone (except me) had at least one lifer or two – more typically a dozen or two.

Of course, the Streak-backed Oriole in Yuma was the most significant rarity we saw, but there were numerous other highlights. Some of my favorites: the concentration of 450 Black-vented Shearwaters swimming offshore in La Jolla as 2 Brown Boobies roosted on a nearby cliff, with one of these especially photogenic….that handsome dark-morph Ferruginous Hawk sharing a hillside with a Golden Eagle at San Jacinto Wildlife Area….a Black Oystercatcher and Surfbird on the same jetty at the mouth of the San Diego River ….the Mountain Plovers spotted in the distance along with many dozens of closer Long-billed Curlews in the fields by the Salton Sea….our successful day in the San Jacinto Mountains, with both Williamson’s and Red-breasted sapsuckers plus a White-headed Woodpecker….my tips from Brennan and Paul leading us to the pair of California Gnatcatchers by the Malcolm X Library and the Scaly-breasted Munia mania by the Fashion Valley Mall….our studies of both “Sage” Sparrow species near Borrego Springs and at Obsidean Butte….and the hordes of Lawrence’s Goldfinches waiting for us at the ballfields back in Imperial Beach.

Mountain Plover   (6 or so distantly near Kalin Rd)

Surfbird   (also seen from Dog Park on the jetty)

Vermilion Flycatcher   (with the Lawrence’s Goldfinches)

Marsh Wren   (the Western form - soon to be split?)

California Gnatcatcher   (thanks to a tip from Brennan Mulrooney)

Sagebrush Sparrow   (all seemed to be Sagebrush around Borrego Springs)

Bell's Sparrow   (nicely teed up for some at Obsidean Butte)

Streak-backed Oriole   (certainly worth the side trip to Yuma)

Scaly-breasted Munia   (thanks to a tip from Paul Lehman) 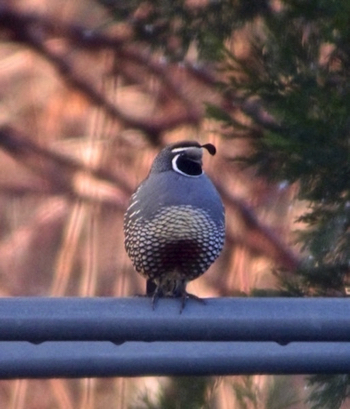 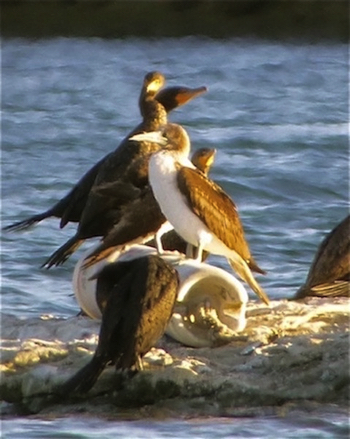 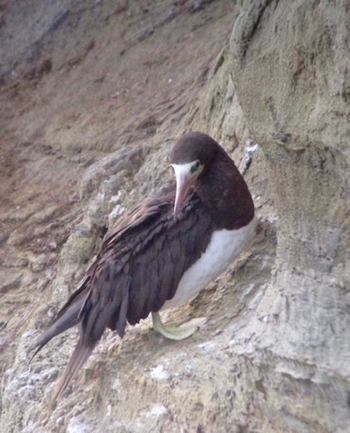 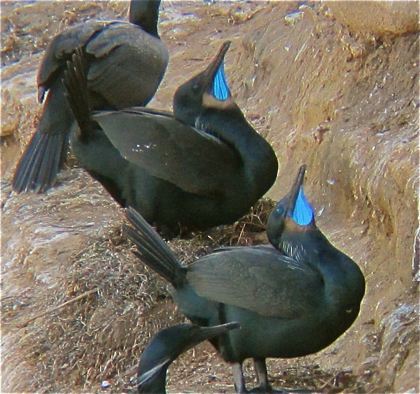 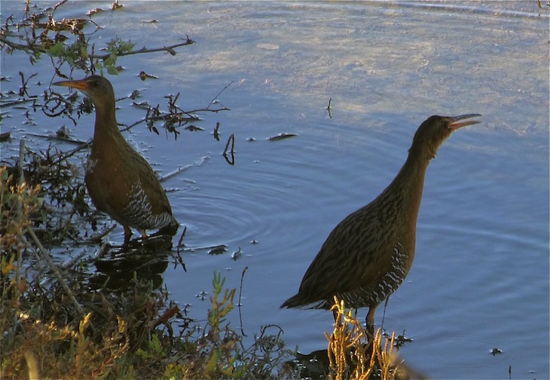 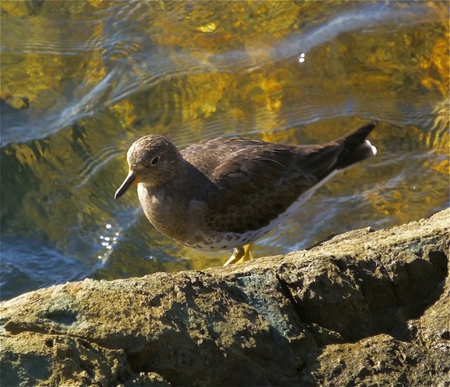 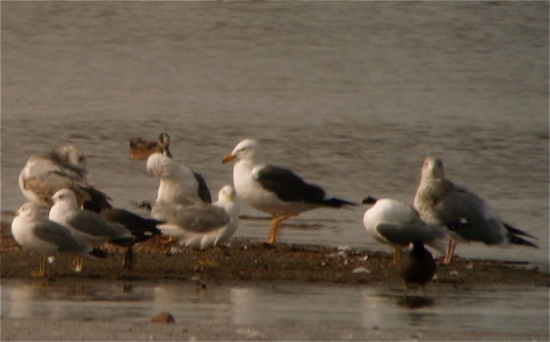 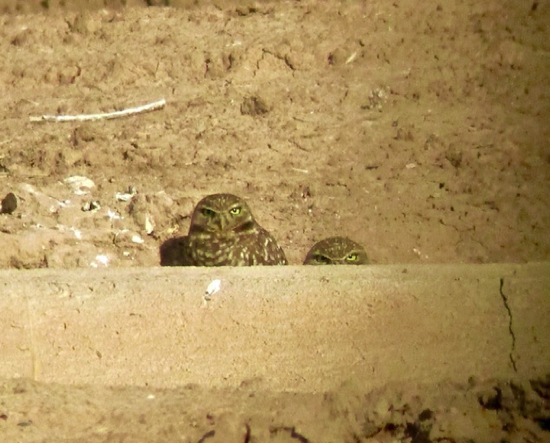 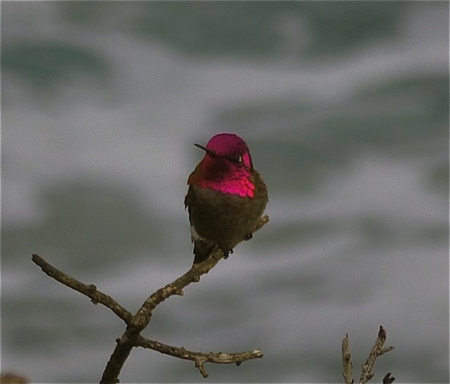 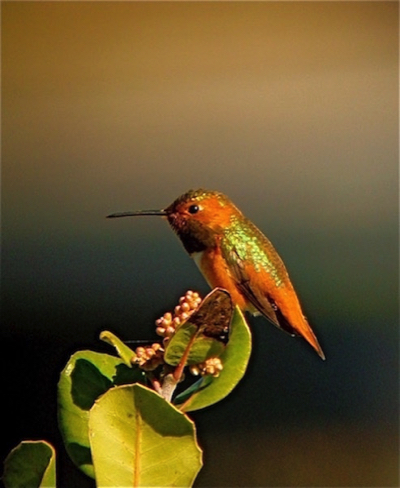 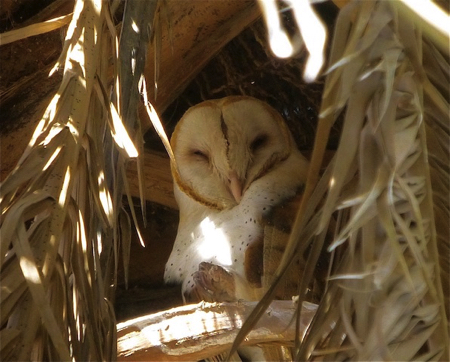 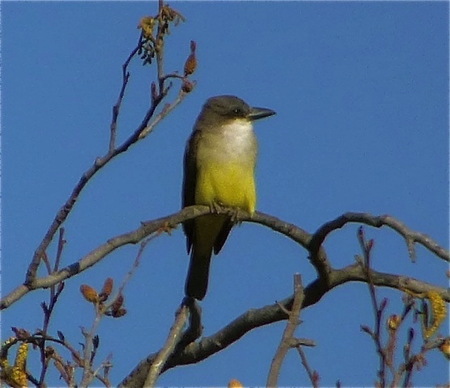 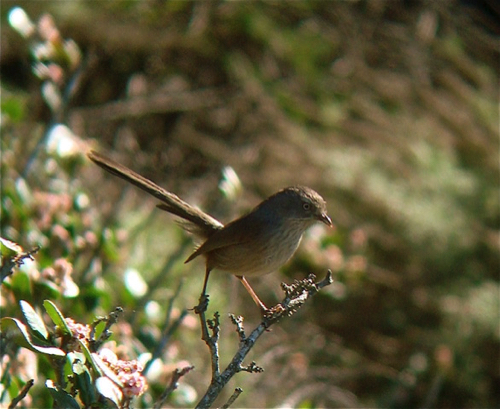 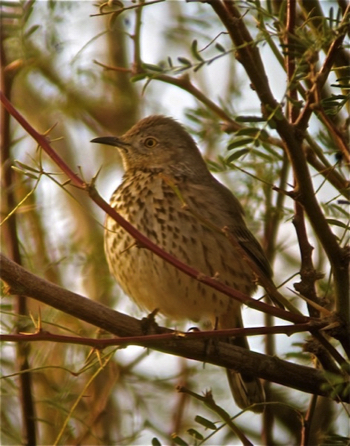 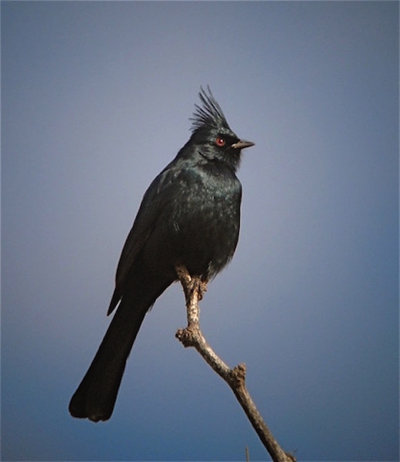 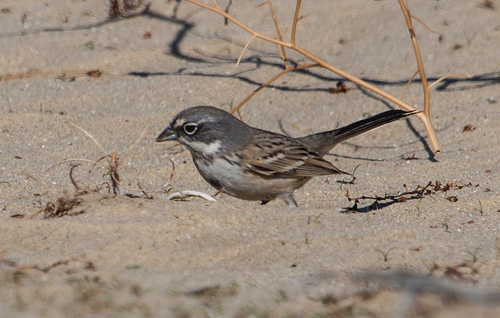 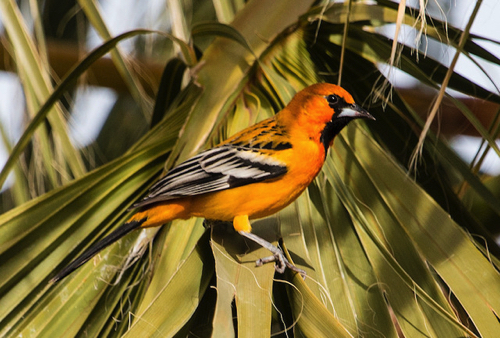 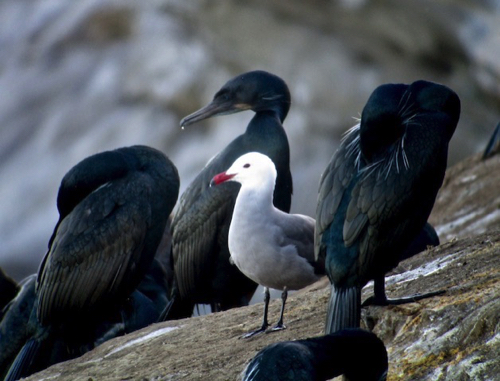 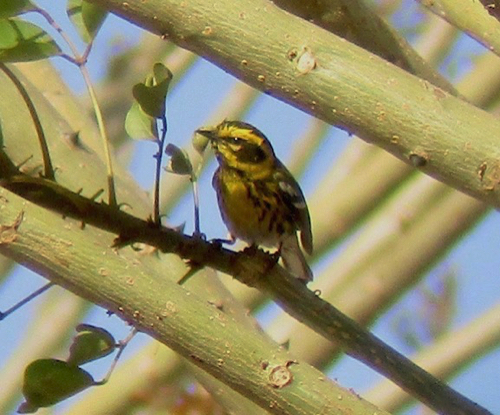 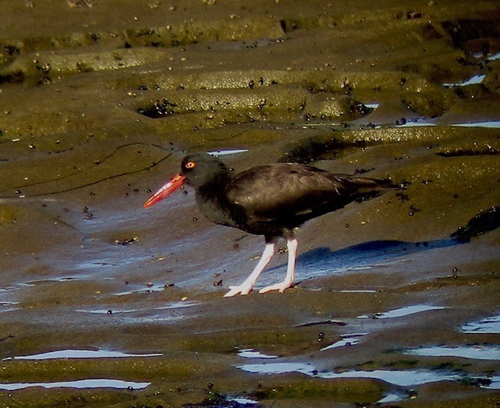 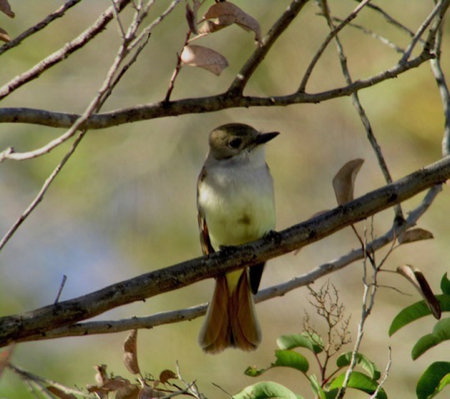 With the sole exception of that Red-throated Pipit (which some Red-faced Birders from MN couldn't find), it was a quite eventful and successful MBWeek. The weather was generally pleasant (especially so on Monday, considering the foot or more of snow which buried much of MN that day), and the traffic was navigible for the most part – except on our drive to La Jolla and back, and Tuesday's excursion to see the wagtail. We came up with a total of 195 species (plus two other possibles at the Idyllwild Nature Center), a few less than our average, but when there are so many staked-out rarities around it takes time to pursue them all. Indeed, we came up with no fewer than 17 "write-ins" on the checklist (!), but our focus on these rarities was at the expense of a few expected birds we mostly (or entirely) missed – e.g., roadrunners, small loons, kites, and bushtits

Leading our list of highlights had to be the staked-out Nazca Booby which we spotted in San Diego Bay just a few minutes before sunset after driving there directly from the airport – a life bird for everyone (myself included), and species #710 on the all-time MBW list! On our first few days in and around San Diego, we also had: both Scissor-tailed Flycatcher and Thick-billed Kingbird in the Poggi Creek greenbelt, plus a pair of California Gnatcatchers in some nearby scrub; great looks oystercatchers, tattlers, and turnstones at La Jolla; a Painted Redstart at Crown Point Park; a handsome Eurasian Wigeon on our second try at the Sweetwater River; and there was even time to find Ridgway's Rails, Scaly-breasted Munias, Allen's Hummingbirds, California Thrashers, Tricolored Blackbirds – and to make about six pipitless visits to Berry Park!

On Day Four we left town and headed for Hemet via a long but worthwhile detour to Prado Park. After some initial delays due to some disorienting preparations for a race in the park, we found our way to the White Wagtail's favorite spillway just as the bird appeared for us out of nowhere. (On the April 2017 MBWeek, this species had been #709 on the MBW composite list.) We then spent the next day in the San Jacinto Mts. above Hemet where we found an amazing concentration of birds at Mountain Center. Here were the first of 3 Lewis's Woodpeckers (0 is normal) along with an endless parade of Mountain Chickadees, Pygmy Nuthatches, Oak Titmice, and others. Next was an equally amazing showing of woodpeckers at nearby Idyllwild and the vicinity of Hemet Lake: two more Lewis's, no fewer than 7 White-headeds (!), an unexpected Red-naped Sapsucker, plus a Red-breasted, and more Nuttall's. There were even some Lawrence's Goldfinch at Lake Hemet, though our views weren't the best.

Anza-Borrego State Park followed, with Long-eared Owls found roosting despite the vague directions (and they were quite a highlight even though they're regular in MN), a male Costa's Hummingbird that couldn't have been more cooperative, and we carefully stalked some Sagebrush Sparrows into view before heading to El Centro and the Salton Sea. Birding at the Sea and vicinity was on the slow side (e.g., no Mountain Plovers or rare gulls), but we successfully found and surrounded a Bell's Sparrow, and we also saw Abert's Towhee, a few Burrowing Owls, and some impressive flocks of Long-billed Curlews by the dozens.

Our MBWeek ended back in San Diego, where, of course, we had to make two more attempts at that pipit – which may have been last seen two days before. Though unsuccessful at Berry Park, we had Black-throated Gray and Townsend's warblers, and out-of range Baltimore Oriole and Summer Tanager at nearby Nestor Park; there were simultaneous views of Tropical Kingbird and Greater Pewee at Balboa Park (two more write-ins); both Gray and Ash-throated flycatchers together at Montclair Park; and finally good views of Wrentits at Tecolote Nature Center where we only heard them days before.

Long-billed Curlew     (dozens in fields around the Salton Sea)

Nazca Booby     R (we arrived to see it just before sunset!)

White-tailed Kite     (only one seen briefly)

Tropical Kingbird     R (with the pewee)

Scissor-tailed Flycatcher     R (with the Thick-billed)

White Wagtail     R (worth the drive to Prado Park!)

American Pipit     (but, alas, no Red-throated) 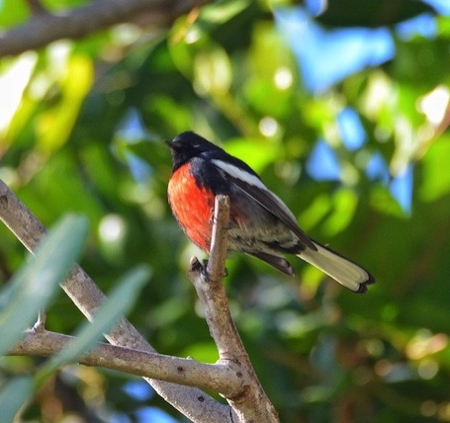 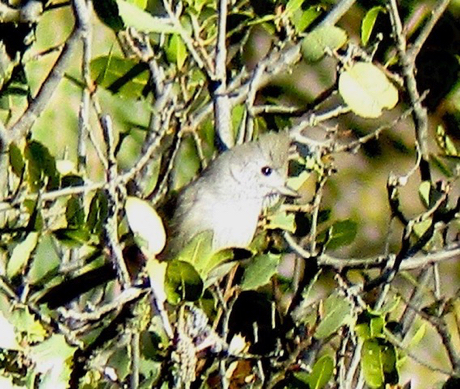 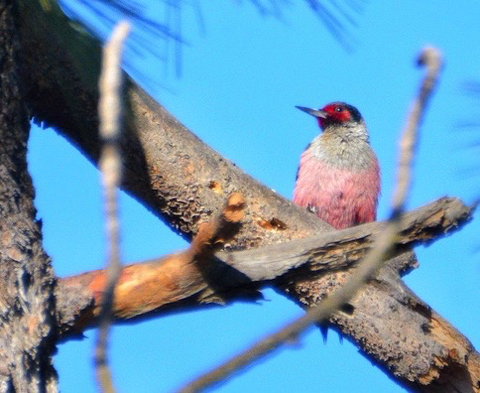 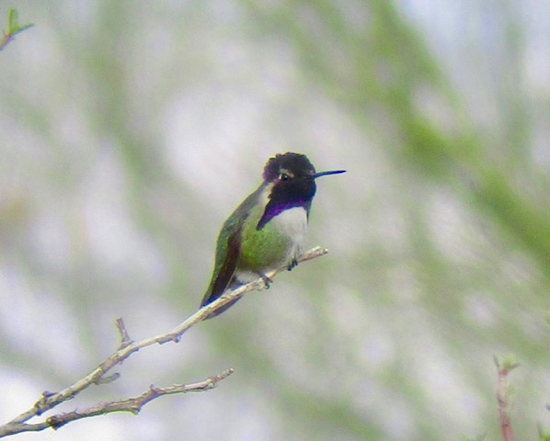 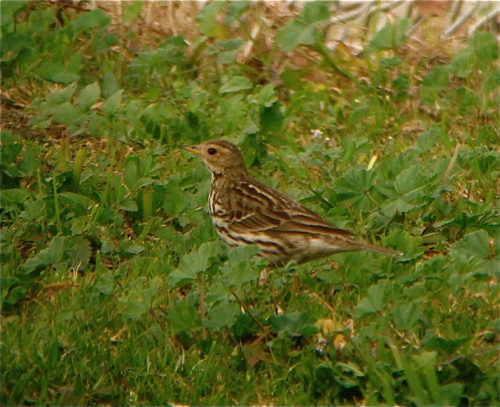 Our side trip also yielded our only Eurasian Wigeon of the week in Anaheim, as we came up with no fewer than 202 species in all – about normal for this MBWeek. This included 11 Arizona-only species as we headed for Phoenix where the trip concluded. Among these were a Crissal Thrasher in Yuma, both LeConte’s and Sage thrashers in some barren saltbush flats near Tacna, a staked-out Ruddy Ground-Dove just west of Phoenix (along with an unexpected Barn Owl), plus Gilded Flickers and Rosy-faced Lovebirds in Phoenix. In all, we then finished with 86 “non-Minnesota” birds during this birding vacation, which also featured non-Minnesota temperatures in the 70s almost every day – while the lows back home were below zero most days.

Other highliights of our MBWeek included all those requisite and quintessential southern California birds in and around San Diego: Wrentits, California Thrashers, and Scaly-breasted Munias at Telcolote Nature Center; California Gnatcatchers at San Elijo Lagoon; cooperative Ridgway’s Rails and wintering Golden-crowned Sparrows at Tijuana Slough; Tricolored Blackbirds at Lindo Lake and en route to Borrego Springs; and more than the usual number of Allen’s Hummingbirds. Near San Diego as well were distant Black-vented Shearwaters and close Wandering Tattlers at La Jolla, along with staked-out Thick-billed and Tropical Kingbirds elsewhere.

A day based in Hemet was next and highlighted by 8 woodpecker species, including the oft-elusive White-headed and both Williamson’s and Red-breasted sapsuckers. Several montane birds not seen elsewhere on our trip were there near Idyllwild too, and we had time for a side trip to Lake Perris where we had no fewer than 3 out-of-place Pacific Loons (we had seen none along the Pacific shoreline), at least 1,400 Western Grebes with some Clark’s Grebes among them, and an impressive number of Mountain Bluebirds.

In the Borrego Springs area we had our first Costa’s Hummingbird, along with Sagebrush, Bell’s, Brewer’s, and Black-throated sparrows all in one area near the sewage treatment plant. And in and around the Salton Sea a cooperative Red-naped Sapsucker was wintering in Brawley, and we brought our shorebird list up to 23 species with Mountain Plovers in a field near our date-shake break in Westmoreland, an out-of-place Ruff at Unit 1 of the Sonny Bono NWR, and an impressive concentration of Long-billed Curlews in a field along Highway 111.

• AZ = seen only in Arizona January 26 en route to Phoenix

Though it took us most of a day for the round-trip drive to L.A. (and perhaps foregoing a few birds back in San Diego in the process), that Red-flanked Bluetail was an exceptional vagrant we just had to pursue. And we all managed to get views of the bird as it chose to limit its brief appearances to a narrow walkway between two hedges on the day we were there. It’s amazing that Jay was able to get a decent photo of this skulker, which was a life bird for all and #712 on the all-time MBW composite list. 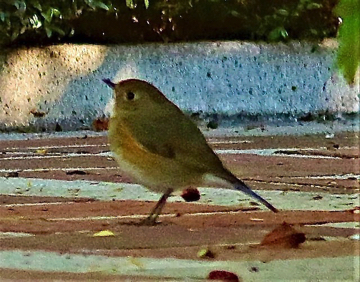 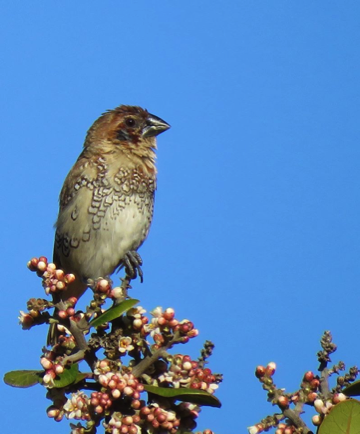 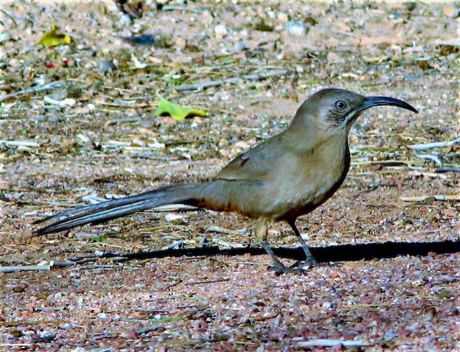