I suppose the one constructive thing you could say about unfavorable weather is that it provides Your Spineless, Wishy-Washy Tour Leader with an excuse when birds don’t perform as planned. I’d have to say, then, that the cold front and accompanying rain showers on Monday must have had something to do with only a few of you being able to briefly hear that invisible Yellow-throated Warbler, and with none of us even hearing a Bell’s Vireo at the “usual spot”. But I’d be at a loss to blame the weather for anything on the three previous days when we had decent temperatures, not much wind, and not really any rain. So, I still can’t explain why that singing Henslow’s Sparrow would only provide us with the briefest of flying-way looks, and I have no idea what that silent Eastern Whip-poor-will was doing while giving a few of us a mere fly-by glimpse of something going from one dirt field to another – and I still say it could have been a Jungle Nightjar! (At least we heard three whip-poor-wills later a few miles away.)

These few setbacks aside, this MBW provided us with a much longer list of successes, as we eventually came up with 136 species in all from Friday to Monday. Friday’s pre-MBW list in Fillmore Co. included 101 species, even though we covered just a small part of the county in the Spring Valley area. I suppose we could have seen more if we’d taken less than a 2 1/2 hour "lunch break” at Forestville State Park, which included a 2-mile hike that turned up 2 Acadian Flycatchers and a quite cooperative, vocal, and visible Winter Wren. Also found that day were an out-of-season (and apparently injured) Snow Goose, late-migrating Olive-sided Flycatchers (plus another the next day in Houston Co) and Philadelphia Vireo, and a surprising 13 warbler species – with 9 of these late migrants heading farther north.

The main MBW from Saturday to midday Monday, mostly in Houston Co, turned up 122 species and an even longer list of highlights. Sunday's Common Gallinule in La Crescent had to be the best of our finds, but noteworthy as well were a lost Am. Black Duck that should have been in northern MN, 2 Peregrine Falcons, a rufous-morph E. Screech-Owl seen by Craig’s group near Beaver Creek Valley State Park (BCVSP), at least 7 Acadian Flycatchers in and around BCVSP (for a grand total of 9), 2 Tufted Titmouse/Titmice/Titmouses (1 at BCVSP and 1 on Hillside Dr.), a pair of Louisiana Waterthrush next to our lunch spot at BCVSP (plus an elusive one wandering through a larger territory in the park), no fewer than 4 Cerulean Warblers (!: 1 at BCVSP and 3 along Hillside Dr. – this same MBW in recent years typically finds none), and Prothonotary Warblers at 3 places. The main MBW’s list included 6 new warblers we didn’t see on Friday, for an impressive overall total of 19 warbler species, 10 of these late-lingering migrants (in all, there were 14 migrant passerine species).

Considering the relatively cold, dark, and rainy conditions we were faced with during much of this MBW, we actually did pretty well. After all, bird song is limited in this kind of weather, and the rains delayed us enough so that we did not spend as much time as I intended to in La Crescent, along the river on Highway 26, and at Whitewater WMA. It was especially rainy on Sunday from late morning on, and on Monday the rain gradually sent the MBWers home after we birded Whitewater State Park.

Still, we came up with 146 species in all during the 4 days, a quite respectable total since relatively few waterbirds were in the mix. Of course, the strong showing of warblers (27 species!) and other migrants lingering later than normal during this cold spring made this total possible. Among the highlights: Fillmore County's 23 warblers (mostly at Kappers ponds), Forestville State Park's Acadian Flycatcher and Louisiana Waterthrush, and both cuckoos along with an uncooperative titmouse almost simultaneously at Eagle Bluff; both cuckoos, two Acadian Flycatchers, and two more Louisianas on Saturday morning, plus a shy Henslow's Sparrow that afternoon; Sunday's Lark Sparrows and Cerulean Warbler despite the rain; and Whitewater State Park's obliging, staked-out Yellow-throated Warbler and relatively cooperative Louisiana Waterthrush on Monday.

Thanks to all of you for putting up with the weather, with special thanks to co-leader Craig for all his assistance (even though he so heartlessly abandoned us on Monday to see the Wilson's Plover in Duluth).

Ruddy Duck     H (with the Trumpeters)

Yellow-billed Cuckoo     FH (both cuckoos together at Eagle Bluff)

Olive-sided Flycatcher     F (seen by those in the Schumacher vehicle)

Yellow-throated Warbler     W (seen by all at Whitewater State Park)

Orchard Oriole     FW (but none in Houston)

As evidenced by the bird list below, it was indeed a memorable Memorial Day. Yes, there were a few things we had hoped to do better on (e.g., uncooperative/heard-only Least Bittern, Black-billed Cuckoo, Whip-poor-will, Cerulean Warbler, Orchard Oriole), and no real rarities turned up, but just about everything else was there. The views we had of Yellow-billed Cuckoos, E Screech-Owl, Acadian & Willow flycatchers, Bell's Vireos, Tufted Titmouse (-mouses/-mice/-moose?), Blue-winged & Prothonotary warblers, Louisiana Waterthrush, and Henslow's Sparrow especially made this MBW a successful one.

In addition, there were quite a few late-lingering migrants still passing through as a bonus, especially notable being the Olive-sided Flycatchers, Philadelphia Vireo, and Blackpoll Warblers. Most interesting as well were that orange-tailed, white-bodied Red-tailed Hawk flying around the Eitzen sewage ponds (which initially almost looked like a Snowy Egret!) and the odd Red-bellied Woodpecker with a pale reddish throat (possibly the result of hybridization with a sapsucker?).

I was also pleased with both Eduardo's and Hackberry's restaurants for handling so many of us so well at our two group dinners. Even the weather all three days cooperated for a change, after so many problems with MBWs earlier this spring! Thanks to all of you, as always, for coming and for helping our somewhat challenging logistics go so reasonably well – with special thanks to Joel, Ron, Al, and Linda for assisting Fred with his groups each day.

And, of course, I thank my old friend Fred Lesher for all his efforts – I hope he's now become a new friend for all of you.

Whip-poor-will (heard-only near the screech-owl)

Willow Flycatcher (seen & heard by all along Hwy 16)

Dickcissel (seen along Wabasha Co Rd 84 just after we adjourned: sorry, we tried to call

following the summary of the 2017 MBWeekend 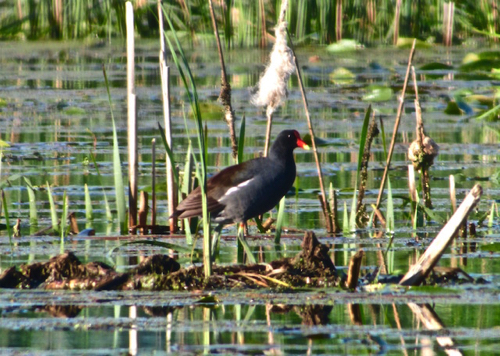