We’ve now had a total of 17 Labor Day MBWs up in this remote part of the state, with a long list of rarities seen over the years – these have even included such unlikely strays as Red Knot, Long-tailed Jaeger, Little Gull, Little Blue Heron, Yellow-crowned Night-Heron, and Prairie Falcon. While none of our best finds this year can match the calibre of any of those, we still had another successful MBW here. Our composite total of 155 species was nearly exactly at our average (= 156); note that this MBW has varied beween 138 species (our lowest in 2011) to our best-ever total of 171 (in both 2008 and 2010). And among our highlights were... [Spoiler Alert! – the following summary includes three new County Birds for my lists]

Our best waterfowl were the early Ross’s Goose at the Warroad sewage ponds (also photographed by Craig just outside of Warroad early that evening), an equally early Cackling Goose noticed by some as it flew over the Super 8 parking lot (along with 2,000+ Franklin’s Gulls), and the Trump(eter) Swans (a.k.a. Donald Ducks?) at Brown’s Lake – new for my Lake of the Woods list. Unfortunately, the Gray Partridges that I lucked into on Roseau CR 9 weren’t there the next day, but a lone Sharp-tailed Grouse did run across the road in front of my group en route to Roseau River WMA. One lowlight was our total of only 13 shorebirds, which ties our lowest number ever (in 2006) and is far below our best shorebird list in 2008 when we had no fewer than 25 species. This year the Warroad sewage ponds was our only decent shorebirding spot and included a juvenile Long-billed Dowitcher and Red-necked Phalarope (Red-neckeds were also at Badger’s sewage ponds).

After an absence of four years (when too many soybeans were planted), Short-eared Owls once again appeared at dusk NE of Roseau along 350th Street – just like they used to as hayfields and grasslands returned to the landscape. Nearby in Roseau itself earlier that day were an unexpected Red-bellied Woodpecker and Gray-checked Thrush (both new for my Roseau list), at the sewage ponds a cooperative flock of late Bobolinks came down and landed for all to see in the scopes, and a concentration of at least 50 Black-billed Magpies was found in a single field SW of town. Meanwhile, Lake of the Woods County provided us with Western Kingbirds, an Alder Flycatcher was strangely still singing vigorously away (if you could hear it, that is), and Red Crossbills happened by at three places near Norris Camp – as suspected, Matt Young at Cornell confirmed their identity as Type 2.

Besides shorebirds, sparrows were another disappointment since we could only turn up seven species  (which has to be our lowest total ever on this MBW), and unfortunately the only LeConte’s was only seen by Craig and a few others early Friday evening just SW of Warroad. But one consolation was our composite list of 20 warbler species, which actually ties the most we’ve ever had on this MBW (we’ve done this about four other times). Although we found warblers at lots of places, we never came across any real concentrations or waves anywhere.

On behalf of everyone, I especially thank Craig for his contributions as co-leader (he again was underpaid, of course, but at least I never had cause to fire him); Gretchen Mehmel for serving as our hostess at Norris Camp (with indoor plumbing!) and taking time to guide us to a couple of nearby birding sites; and 9-year old Cooper who justly earned the coveted JTLMB for coming on his first MBW as the youngest MBWer ever in our 34-year history. –Kim Eckert

L = seen in Lake of the Woods County

Thanks to Wayne Johnson of Thief River Falls public works

for his continuing hospitality in permitting access to birders.

We sort of suspected our 19th Labor Day Weekend MBW in northwestern Minnesota would be challenge. Drought conditions were perhaps worse in this part of the state than any other, and the recent bird reports there were few in number and not very encouraging. And it didn’t help that it was on the windy side much of the time, especially Monday when the winds were up to 25 mph. As a result, we managed to come up with a modest total of 147 species in all, including the 8 found only on Friday’s pre-MBW in Polk Co (which also ventured a bit into Marshall). As expected, this was below the average of 155 species for this MBW, which has ranged between a high of 171 and a low of 138.

Probably the main reason this MBW’s total was on the low side was the relative lack of water birds due to many dried-up wetlands areas. This was most noticeable in the lack of shorebirds, as we could only find 13 species, just one more than our lowest-ever total of 12 (our best-ever total was 25 shorebirds). But at least our composite total of 19 warbler species was about as good as we ever do, since 20 is the most we’ve ever come up with (and we’ve done that several times). One interesting aspect of this was the general lack of warblers in the wooded areas Craig et al. tried in Polk Co on Friday, while they found the most in the sunflower fields they stopped at – including a Northern Waterthrush and Wilson’s Warbler perched on power lines over these fields.

Among our highlights over the four days were Sharp-taiied Grouse walking across a back road in front of half the group, Wild (and not-so-wild) Turkeys for the benefit of Marshall County listers, and Eurasian Collared-Doves in a Thief River Falls neighborhood. Our better shorebirds were a Stilt Sandpiper (seen by Brad), Sanderling at the TRF sewage ponds, and Red-necked Phalaropes there and at Karlstad’s sewage ponds. A Caspian Tern at TRF’s ponds was unexpected, distant Great Egrets were at Agassiz NWR, Merlins were migrating everywhere, a LeConte’s Sparrow near East Park WMA was a good find by half the group, and the best warbler was a Connecticut at Old Mill State Park (but seen only by Craig and Jerry). 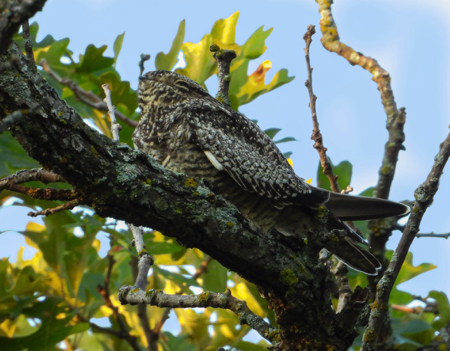 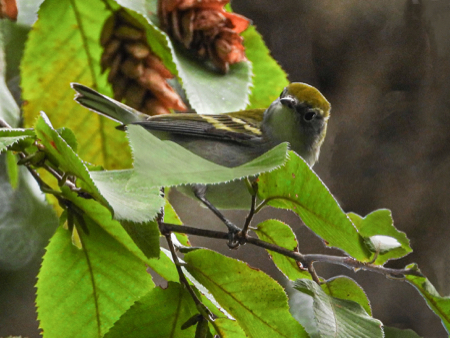 Solitary Sandpiper – one of only 13 species on this MBW

One of many migrating Merlins

Bay-breasted Warbler – not a Blackpoll for a change 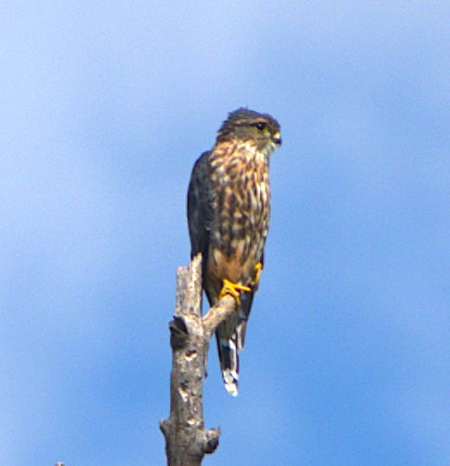 Note that these MBWs included other counties which

are near Kittson and recorded species possible on the 2023 MBW

This was our 20th consecutive MBW on Labor Day weekend to relatively remote northwestern Minnesota, and, as always, we came up with an interesting assortment of birds. The weather mostly cooperated, with light to moderate winds on all five days, and there was no rain to slow us down. It may have been too warm in the 80s on Thursday afternoon, but temperatures moderated nicely the rest of the weekend, although it was somewhat disappointing that Friday’s cold front failed to produce much migration – so maybe some rain showers might have grounded some migrants and would have been welcome.

Our composite species total of 163 was only 8 shy of this MBW’s all-time record of 171, but this was primarily the result of having an extra day of birding this year. This MBW is normally 3 or 4 days long, not 5, and the average species total is 155 – so remove the extra day, and we would probably have been in the 150s.

Our target every year is to find both 20 shorebirds and 20 warblers, but we have never quite managed to do both on this MBW. We came up with 19 warbler species this time, which is probably close to average (an even 20 is the most we’ve had, and we’ve done that several times). We found no real significant waves of warblers and other migrants this year, save for the few miles worth of non-stop passerine activity along Pitt Grade Forest Road on Thursday morning. Indeed, our usually dependable sites for migrants at Zippel Bay State Park, Warroad, Springsteel Island, and Roseau City Park were mostly disappointing.

Meanwhile, our total of 17 shorebirds was quite respectable, given that none of the sewage ponds we checked in these counties or the drawn-down pools at Agassiz held more than a few species. But we chanced upon the pair of flooded fields at South Shore WMA on Friday afternoon, plus the mudflats in fields along MN Hwy 310 on Saturday and on 360th Ave the next day. These combined to give us a total of 12 Buff-breasted Sandpipers, both American Golden- and Black-bellied plovers, as well as Stilt, Baird’s, Solitary, and other sandpipers.

Some of our other highlights included unseasonal Snow and Cackling geese, a Eurasian Collared-Dove in Roseau (a rarity in northwest MN), lots of Sandhill Cranes, Great Egrets at Roseau River WMA (also rare this far north), an unexpected Black-backed Woodpecker along MN 310, a Peregrine Falcon at Agassiz, and two concentrations of Black-billed Magpies: about 40 or so just east of Roseau River WMA, and at least 30 going to roost near the Roseau sewage ponds.