I can’t recall for sure, but it certainly seemed like we saw at least some rain on each day of this MBWeek, although it never really interfered that much with our birding. Windy days weren’t much of a problem either, which is pretty remarkable given that wind is so characteristic out on the Great Plains. And the high temperatures thoughout the trip were mercifully on the moderate and cool side without anything much above 80 and nothing in the 90s. So, we had no meteorological excuses to fall back on if the birding hadn’t gone all that well.

But our week was indeed successful as we turned up no fewer than 179 species in all, with 31 of these “non-Minnesota” birds (see list below). Among these, eight have never been recorded here (Broad-tailed Hummingbird, Red-naped Sapsucker, Dusky and Cordilleran flycatchers, Plumbeous Vireo, Pinyon Jay, Pacific Wren, Virginia’s Warbler), and about the same number have only been seen a time or two ever before in MN (Common Poorwill, White-throated Swift, Violet-green Swallow, Pygmy Nuthatch, American Dipper, Brewer’s Sparrow, MacGillivray’s Warbler). In addition, we saw at least a couple dozen more which at best are only rare-Regular or Casual in our state. Consider as well that virtually all of our total represents species within their nesting ranges – there were no migrants to enhance our lofty trip total (just a handful of summering Snow Geese).

True, there were some disappointments as we were unable to come up with any sage-grouse or McCown’s in ND, but you can’t really call these “misses” since eBird shows there was only one sage-grouse report in the Dakotas in 2019 (one lone bird in April in Harding County, SD) and no reports at all of the longspur. But I guess I’d have to classify the Canyon Wren and Cassin’s Finch as missed, and we never did officially list Prairie Falcon – though the unidentified falcon circling over Hell Canyon was probably this species. It was disappointing, too, that the Clark’s Nutcracker and Virginia’s Warbler were heard-only, that the Pygmy Nuthatch was only seen by a few of you, and it sure would have been nice if more than those lucky four in the Martin car could have seen that quite unexpected Pinyon Jay (there have been no other eBird reports in the Dakotas in 2019!).

But I would say that all of our highlights easily outweighed the few birds we missed. Some of these favorites in South Dakota would include: that amazingly visible Common Poorwill that put on quite an aerial show by the Picnic Springs Campground entrance (the best flight views I’ve ever had); the male Broad-billed Hummingbirds “trilling” along a Hill City side street; Lewis’s Woodpeckers at a nest along Four Mile Draw Rd in Custer State Park; our first good Red-naped Sapsucker views, an unexpected American Three-toed, and Clark’s Nutcrackers calling along the trail to Black Elk Peak; good looks and listens at both Dusky and Cordilleran flycatchers; singing Pacific Wrens, our best MacGillivray’s views, and even another three-toed woodpecker or two at Ward Draw; an American Dipper pair and low-flying White-throated Swifts at Roughlock Falls; and vocal Red Crossbill flocks almost everywhere in the Ponderosa pines (those I recorded at Jewel Cave and Picnic Springs were identified as Type 2).

And on the North Dakota side of the line, I’d consider some of our best finds to be: a very responsive and visible Sprague’s Pipit posing on a Slope County road north of Bowman, both Baird’s and Brewer’s sparrows singing along the Camp Crook Rd (as a Long-billed Curlew tried to distract us from the Baird’s posing on a fence wire), three oriole species (including Bullock’s) nearly simultaneously at Cottonwood Camppground in Teddy Roosevelt Park, and all the additions to our MBWeek list on the last day en route back to Morris (Least Terns and another Piping Plover at Kimball Bottoms near Bismarck; a large nesting colony of Cattle Egrets, White-faced Ibis, and Franklin’s Gulls at DeWald Slough; and nice views of Clark’s Grebes at Eckelson Lake).

Finally, in addition to all the birds we saw, there was an abundance of impressive scenery provided by the rugged Badlands of both Dakotas, the forested canyons and mountains of the Black Hills, and the endless horizons of vast national grasslands. There were even several interesting mammals along the way (see list below) – plus one reptile species which was especially memorable when we heard its rattle at two places.

June 15 – Meet in Morris MN by 8:00 am; drive to Wall SD via Snowy Egret on Hwy 28, Say’s Phoebe on Traverse CR 2, Wilmot Information Center, Aberdeen, Roscoe Lake, and below Oahe Dam (Piping Plover); night in Wall & dinner for most at the Red Rock.

Once again, this MBW added to the wide assortment of weather difficulties that MBWers have faced so far this year. This time it was the hailstorm on Tuesday that turned the roads to white as we tried to bird Tepee Gulch. Moderate to heavy rains also fell that afternoon, including during our obligatory stop at Mount Rushmore, and some rain also interrupted our birding efforts on a couple of other days. But most days were rain-free, the temperatures were cool to moderate with nothing becoming too warm until the last day or two, and remarkably there were no high winds to make birding difficult as is so often the case out on The Great Plains.

We accumulated a grand composite total of 193 species during this MBWeek, which is 14 more than our previous effort of 179 species in 2019. While these numbers might suggest that this year’s trip was better, consider that our 2022 MBW was a day longer, it included several migrant shorebirds (no migrants listed in 2019), and this year’s itinerary was improved somewhat after our “scouting” three years earlier.

Note that each MBW was pretty much the same in terms of key species which one trip mostly or entirely missed and the other found. In 2019, the group missed Prairie Falcon, Canyon Wren, and Cassin’s Finch, only a few MBWers reported a Pinyon Jay, and the Virginia’s Warbler was heard-only (all of these were seen in 2022). But on the other hand, in 2022 we missed Clark’s Grebe, Piping Plover, Least Tern, Clark’s Nutcracker, and Pacific Wren (all seen in 2019).

The highlights of our MBWeek primarily involved those birds which are “non-MN” species (see those boldfaced below). There were 30 of these in all, including 8 which have never been recorded in MN (Broad-tailed Hummingbird, Red-breasted Sapsucker, Dusky & Cordilleran flycatchers, Plumbeous Vireo, Pinyon Jay, Canyon Wren, Virginia’s Warbler), and another 7 with only a single record or two (White-throated Swift, Common Poorwill, Violet-green Swallow, Pygmy Nuthatch, American Dipper, Cassin’s Finch, MacGillivray’s Warbler).

In addition to all those birds, there were some interesting mammals during our travels. Among these (a partial list, in no particular order) were: Bighorn Sheep, Bison, Pronghorn, both Mule & White-tailed Deer, Elk, Wild Horses, Black-tailed Prairie Dogs, Yellow-bellied Marmot, Badger (in conflict with Burrowing Owl), Coyote, Red Fox (babies), White-tailed Jackrabbit.

(species not annotated = seen in both SD and ND) 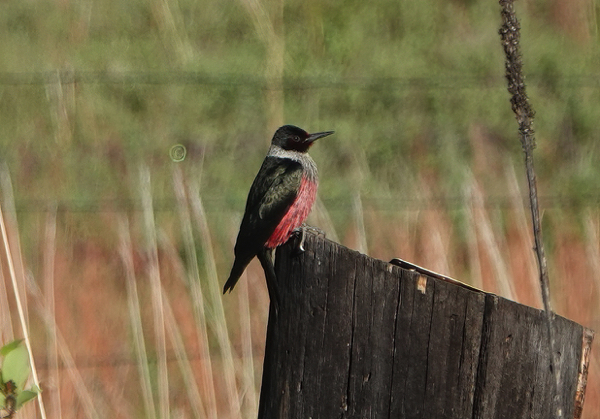 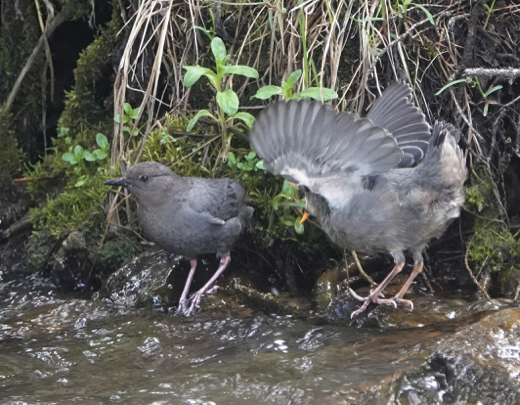 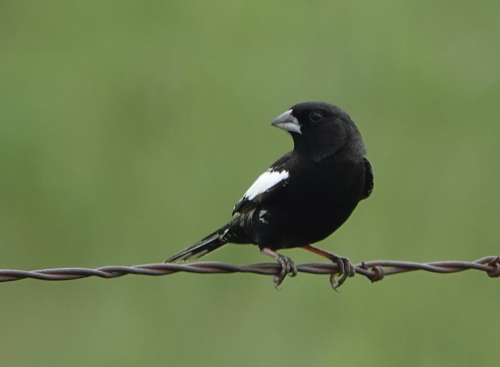 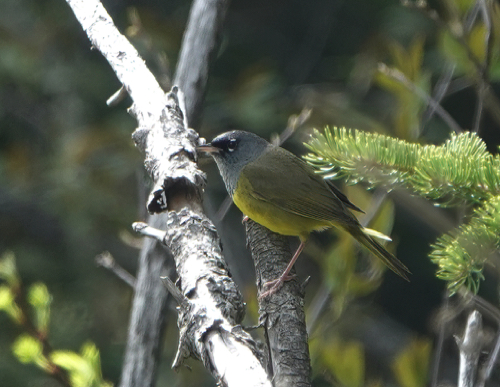 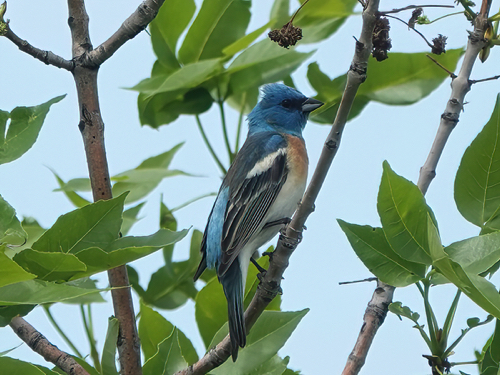 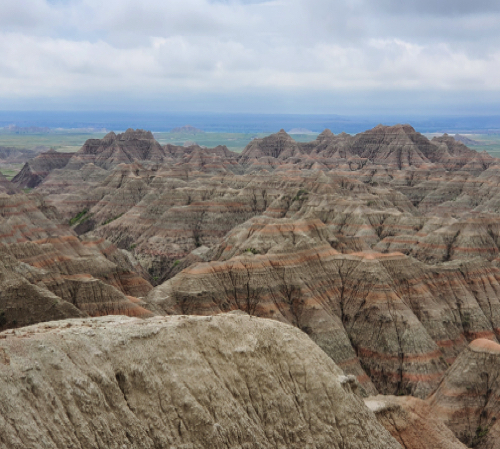 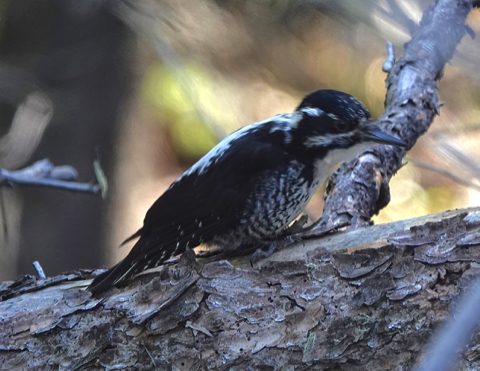 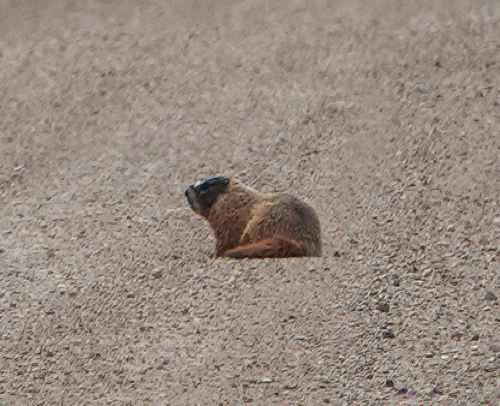