I would like to thank you all for joining me on the Beltrami County portion of this Minnesota Birding Weekend. We were very lucky that the big storms went through on Thursday; otherwise, I believe we could have broken the windiest-ever MBW record. As it was, it was still quite windy with gusts in the mid-30 mph range. The intermittent rain also made for difficult birding at times. Doing a number of loops in the county offered us a nice variety of habitats, and I think everyone's favorite spot was the bog boardwalk.

(Herring Gull - Lake of the Woods only)

(Rock Pigeon - Lake of the Woods only)

Olive-sided Flycatcher - heard-only on the boardwalk

Connecticut Warbler - singing bird heard, and sort of seen, along the boardwalk

Lincoln's Sparrow - heard and seen along the boardwalk 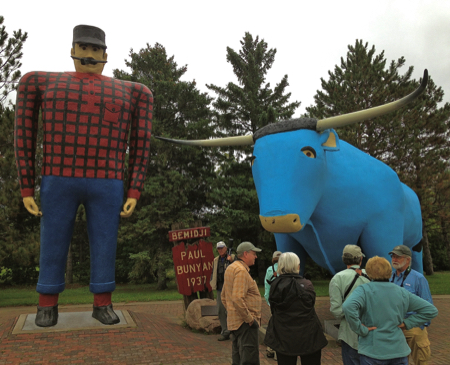 There were times when it seemed we weren't seeing much, especially as we tried to find something to look at during the rain on Saturday, and trying places that weren't as active as we had hoped. But eventually it all added up and pieced together nicely as we somehow managed a grand total of 150 species for this MBWeekend and pre-MBW.

Friday's pre-MBW was especially successful since we came up with no fewer than 128 species (all but 2 of these in Clearwater Co), even though there were only a few places of real note that we visited. Our stop at Upper Rice Lake yielded nice counts of 69 Red-necked Grebes and 105 Trump(eter) Swans (a.k.a. Donald Ducks?), and that remote impoundment within the Red Lake Sovereign Nation featured several birds for our "non-Clearwater County" lists: e.g., American Bitterns, Green Heron, a baby-on-board Common Loon, an inexplicably-popular Belted Kingfisher, and heard-only Virginia Rails that refused to walk up into view in that tick-infested grass. In between, of course, was the day's best birding at the Skoe rice paddies. Here we found 13 duck species (including American Black Duck), 2 or 3 very surprising American Avocets, an apparent family of Marbled Godwits (with juveniles), at least 20 very late-lingering White-rumped Sandpipers, and a pair of Wilson's Phalaropes.

Our time on Saturday and Sunday morning in Beltrami Co featured more rain (and mosquitoes!) than in Clearwater Co, and our species total for the county was 118 (including Friday's Common Terns) – mostly due to fewer ducks and other water birds. But the always impressive Big Bog boardwalk on Saturday gave us a responsive Black-backed Woodpecker, Yellow-bellied (exceptional views) and Olive-sided flycatchers, Gray Jay, a distantly-heard Connecticut Warbler, and some close Palm Warblers on territory. En route from the parking lot to the boardwalk, there also were two fly-by Red Crossbills – along with one of the worst hordes of mosquitoes I can ever remember.

Sunday morning's loop in and around Bemidji mostly managed to avoid the rain, and en route to Bemidji State Park both groups had great looks at a close LeConte's Sparrow, a Red-headed Woodpecker along the same road, and some unexpected Dickcissels singing from two spots along Sunnyside Rd. Since the state park was on the quiet side, Doug suggested we move on to Three Culverts Rd, where things were more active. Along one stretch of this road we turned up a dozen species of warbler (including Northern Parula, Canada, Mourning, and an odd-sounding Blackburnian), and a bit later at another spot we tracked down some Black-throated Greens (for a total of 18 warblers on the weekend) as two Barred Owls serenaded us – with one of them finally emerging into view for all to see.

following the summary of the 2018 MBWeekend