I may have been the only one disappointed that the forecast high of 97 in La Crosse on Friday failed to reach its mark. It was a mere 94, shy of the all-time high temperature record of 96 degrees on a MBWeekend. (That MBW was based in Ortonville in July 2006, and it was called off early Saturday afternoon; had the Sunday part not been canceled, we would have set a record that would be hard to beat – the high that day was 106 degrees, with a heat index of 110!)

As it turned out, the weather on our Houston County MBW was close to ideal on Saturday and Sunday morning, pleasantly cool both mornings and tolerably warm Saturday afternoon. No rain fell on us, it was only windy at one of our stops, and mosquitoes were not a distraction anywhere. Admittedly, it was still hot early Friday evening as most of us headed over to La Crescent after dinner for a 2-hour pre-MBW session, but there were enough birds to distract us from the temperature. We had a close and cooperative Prothonotary at the start of the Wagon Wheel Trail, a family of Barred Owls whooped it up on Shore Acres Rd., and a Common Moorhen (now only a local and uncommon/rare species in MN) was waiting for us at Blue Lake.

Saturday was clearly highlighted by our morning drive on Hillside Rd. We turned up no fewer than 4 Cerulean Warblers, 3 Tufted Titmice, a heard-only Acadian Flycatcher, and two singing Henslow’s Sparrows (one of which posed in the scopes for a few minutes for all to see)! More Prothonotaries were at always-reliable Millstone Landing, and after lunch your Spineless, Wishy-Washy Tour Leader had no idea where he was going as he missed a turn, tried the next road that went the wrong way, and mis-led the group through a corner of Iowa.

Back in Houston Co., our first stop at Gordon Anderson Recreation Area was a big disappointment as the drought had all but destroyed the grassland. But our next drive along Quarry Rd., Eitzen Creek Dr., and Backwoods Dr. brought us into some beautiful remote woodlands where I managed to find the way without mishap for a change. No Timber Rattlesnakes were on their traditional limestone ledges, but the nest cavities for both Pileated and Red-headed woodpeckers in the same snag were the afternoon’s highlight – especially for those who could see the two baby Pileateds in the hole. Our last stop before an early dinner was for Willow Flycatchers at Shamrock Lake, and after dinner a few were still awake enough to go out and hear an E. Whip-poor-will near Hokah.

Sunday morning finally brought us to Beaver Creek Valley State Park, where our hike in refreshingly cool temperatures yielded at least 6 Acadian Flycatchers plus a Louisiana Waterthrush that took awhile to finally appear and show itself for all to see as it finally sang from a visible perch. After the park, there was just enough time to try for a stake-out Bell’s Vireo on Walcker Dr. that finally showed for those who had enough time to hang around for an extra 45 minutes. A Yellow-billed Cuckoo was also heard and seen briefly by some, as we brought our final list to 103 species.

Black-billed Cuckoo (seen only by Pete at the state park)

Eastern Screech-Owl (heard only by Frank on Shore Acres Rd.)

Acadian Flycatcher (1 on Hillside Rd. + 6 at the state park)

Bell’s Vireo (finally seen by some on Walcker Dr.)

Henslow’s Sparrow (1 seen and another heard on Hillside Rd.)

Louisiana Waterthrush (a reluctant singing male at the state park) 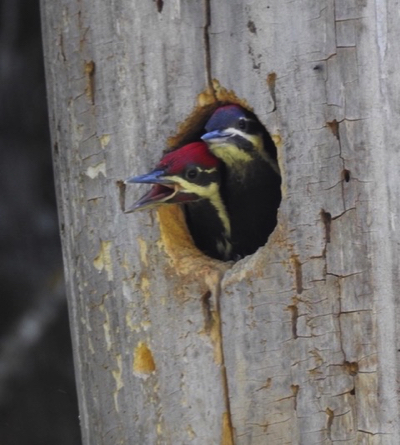