Though perhaps too warm Saturday afternoon (70 degrees!) and with dark overcast that morning, the weather during these three days was still quite decent overall. True, the conditions weren’t conducive to producing much migration, but it never rained (or snowed) on us, nor did the high winds forecast for Friday ever materialize. And for the most part the birding was as decent as the weather, and we came up with a fairly impressive list of interesting highlights.

On Friday’s pre-MBW, we spent most of the day in Two Harbors in Lake County, with a drive up to Castle Danger to end the day. Here we had close looks at a freshly-plumaged adult Grasshopper Sparrow, which is quite unusual anywhere in NE Minnesota; almost as unusual was the juvenile Red-throated Loon we then found after lunch, and later we came up with three Surf Scoters. Noteworthy as well in Two Harbors were four meadowlarks (0-1 is normal here) and a few Cackling Geese, and there was a nice-looking Am Golden-Plover at Castle Danger’s sewage ponds.

There wasn’t quite as much bird activity on Saturday, but three White-winged Scoters and a Dunlin at Park Point brightened up the overcast morning, as did a couple of Black-bellied Plovers and a Bonaparte’s Gull. Things then slowed down a bit until we finished the day in Knife River back in Lake County, where there was lots of activity as numerous robins and other birds swarmed around the mountain ash trees.

We then returned to Lake County on Sunday where we had a brief view of an early juvenile Northern Shrike, an unexpected fly-by Red-bellied Woodpecker, and a fly-away Black Scoter in Knife River – and finding all three scoters is not easy to do. And back in Two Harbors there was yet another Red-bellied (0 is normal in NE Minn), a late Tennessee Warbler, and the Red-throated Loon was not only still present but also uncharacteristically close to shore.

• PRE = found only on Friday’s pre-MBW

(species not marked PRE or MBW were found on both) 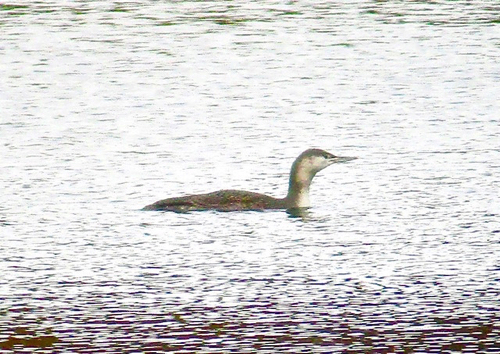 Well, the October 2 pre-MBW was supposed to be along the North Shore, but we made it only as far as Two Harbors before we turned around. We had at least found two Surf Scoters at Stoney Point, a cooperative Lapland Longspur and a late House Wren in Two Harbors, but the migration that morning was almost non-existent, the winds off the lake were starting to pick up in the early afternoon, and there had been sightings in previous days of California and Lesser Black-backed gulls at the Superior Entry breakwaters. So we regrouped back at the Superior Entry, only to be greeted by sustained 25-30 mph winds that made gull-watching quite a challenge. But everyone was able to get good scope views of a second-year Thayer’s Gull on the breakwall on the Minnesota side – a decent enough consolation prize since those two rarer gulls were no where to be seen.

The east winds on Saturday weren't supposed to be as bad, but by the afternoon they were again blowing at 25-30 mph. We spent the morning at Park Point and at least turned up both a fly-over American Golden-Plover and a fly-away Black-bellied Plover, along with an immature Franklin’s Gull (a Duluth rarity) which appeared on the ballfield for the benefit of about half the group who hadn’t yet departed for lunch. Though the winds were from the wrong direction, we spent the early afternoon at Hawk Ridge and predictably saw hardly any raptor movement (but at least we were entertained an officious and overly-zealous traffic officer/volunteer who apparently had nothing better to do). Since the winds were still too strong off the lake, we wisely elected to spend the rest of the afternoon somewhat out of the wind at Indian Point and on Clyde Avenue near Morgan Park along the St Louis River. Here we found an unexpected Virginia Rail (most were even able to briefly see it), somewhat late Solitary and Spotted sandpipers, a cold Eastern Phoebe, and our best views of a close and cooperative Harris’s Sparrow.

It was a relief when the winds actually did subside on Sunday, although the migration was still slow. (After 4-5 days of persistent fog and drizzle finally ended the previous weekend, a rush of migrants pushed through the last few days of September, so that relatively little was still around to see during our MBW.) But on Sunday morning at Stoney Point, Two Harbors, and Castle Danger, we relocated the Surf Scoters and found a late Black-throated Green Warbler, some found the Cackling Goose again (a few had also seen it on Friday), and there was another Lapland Longspur posing for all to see at close range. Some of us then made another try for gulls at Park Point and Superior Entry before returning home but came up empty. In all, then, we managed to come up with 78 species, which was understandably fewer than normal (the mid-80s is probably our average on this MBW), with 55 species on Friday's pre-MBW (7 of these were only seen that day), and 71 on the main Saturday-Sunday MBW.

following the summary of the 2018 MBW 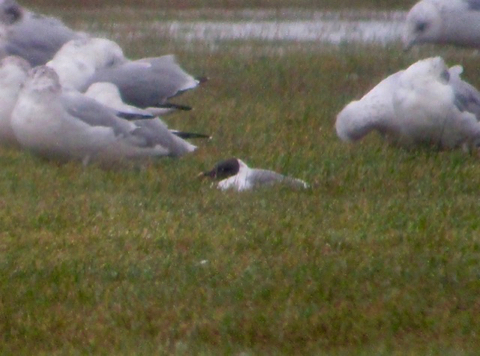 "Digibin" image of a cold Cape May Warbler in Two Harbors

trying to find insects with temperatures in the mid-30s. (KRE photo)

In a way, the two photos above pretty much sum up our Duluth-based MBW – a rarity blown in by those destructive gale-force winds off Lake Superior on Wednesday, followed on Thursday by a late-lingering migrant try to deal with 20+ mph NW winds, snow, "highs" in the 30s, and some January-like wind-chills that made life difficult for both birds and birders. Note that this time the W in MBW stood for Weekdays, designed to avoid higher lodging costs and leaf-watching traffic so characteristic of fall weekends here. But any delusions of brilliance your Spineless, Wishy-washy Tour Leader might have had with this strategy quickly vanished when he canceled Tuesday's birding (when the weather was supposed to be bad but turned out to be somewhat reasonable) and rescheduled it for Wednesday (when that meteorological event had earlier been forecast to be winding down – but didn't).

Still, we somehow managed to come up with a grand total of 96 species (the most ever on this MBW?!) during these three days. In addition to the adult Sabine’s Gull huddled on the Park Point ballfields among the other gulls (nice spotting, Judy), some of our better finds included: Surf and White-winged scoters on the bayside of Park Point, plus 3 Ruddy Ducks there on Friday (a rarity in NE Minn); 8 shorebird species, highlighted by Black-bellied and Am Golden-Plovers, Dunlins, and Pectoral Sandpipers on the flooded Park Point ballfields (especially on Friday when all 4 foraged together in front of us); hunting Merlins at almost every place we went; late-lingering Blue-headed Vireo and Gray-cheeked Thrush; non-stop Am Robins by the 100s migrating down the N Shore on Thursday- Friday, along with good numbers of Blue Jays, both kinglets, thrushes, sparrows (12 species total), Rusty Blackbirds, and Yellow-rumped Warblers; a few early and sought-after Bohemian Waxwings; and 6 warbler species (all of them desperate to find insects in the cold): Orange-crowned, Nashville, American Redstart,

a late Cape May, Palm, and Yellow-rumpeds – the latter species at almost every place we went (under the watchful eyes of Merlins).

But perhaps the most impressive birding we had was saved for last on Friday afternoon, when the winds had finally moderated and the sun came out, and those of us still in town watched dozens of Yellow-rumpeds forage around the edges of the standing water on the Park Point ballfields, as both plovers, Dunlins, and Pectorals ran around just behind them.

We all thank Dave Benson for his co-leadership – especially on Wednesday when I got to stay inside most of the day! And I thank all of you who came out despite the weather and got soaked, wind-blown, and wind-chilled in the process – but at the same time managed to maintain your patience and a good-natured attitude through it all.