You’d think with a view like that of a rainbow framed by fall colors as the group met on Thursday morning would suggest we’d be in for some nice weather. Well, let’s see...the day before it had reached the upper 80s, 20 degrees above normal, hot enough to cancel plans for a pre-MBW afternoon in Sibley County...then some steady, quite heavy, and disorienting downpours washed away much of Thursday afternoon...our return to Redwood Falls from the Brown County option Friday afternoon was met with more heavy rain...and we birded through fog, dark overcast, and enough light rain to soak us on Saturday morning. We had to wait until Sunday to see the sun for the first time as cool and ideal temperatures finally provided a near-perfect day.

At least we had four days without any difficulties with the wind (which blows more often than not on the prairie), and we did experience some decent birding with several highlights. In all, we came up with 118 species (not including that Chukar seen on Redwood County’s River Road both Thursday and Sunday), not a bad total since we did relatively little wetlands birding – partly because only a part of Boon Lake was checked during Thursday’s rains. Two of our more interesting water birds presented ID challenges. That oddly colored merganser at the Lower Sioux Community sewage ponds seemed to be a Red-breasted, even though that species is relatively rare on the prairie at any time of year. And I’m confident that the distant Horned Grebe at the Sleepy Eye sewage ponds was the correct ID, although other birders were apparently (mis)calling it an Eared. Sleepy Eye’s ponds also provided us with a Sanderling, while a flock of American Golden-Plovers flew by the Renville sugar beet settling ponds.

Considering the birds of a more terrestrial nature, 12 species of raptors (including 3 falcons and an owl) was a respectable total, as some of these were migrating along the Minnesota River Valley. These included two Peregrines in Redwood County and the Barred Owl at Vicksburg County Park heard on both sides of the river. We could only manage 10 warbler species this late in the season, but it was impressive to find a total of 17 sparrows. (All we missed were Lark, American Tree, Henslow’s, and Spotted Towhee – which would have been late, or early, or unexpected rarities.) Our list included at least 10 LeConte’s (! – 2 at the Brown County slough on Friday, 5 more there on Sunday, 2 at Cedar Rock WMA on Sunday, and another Saturday at Lamberton WMA ); the Grasshopper Sparrow on a Sanborn sewage ponds fence wire (briefly seen by Matt and/or Pete?); and a Nelson seen by Linda S (when 2 sparrows flew in on Sunday at that slough, the rest of us focused on a LeConte’s while she saw the other – the one behind the grassy knoll? – was a Nelson’s). 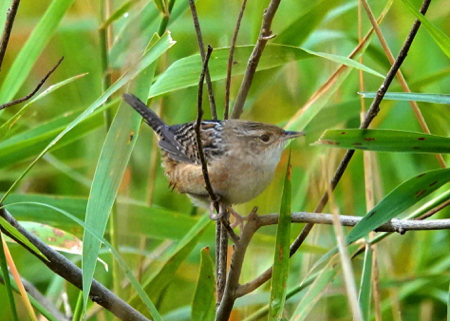 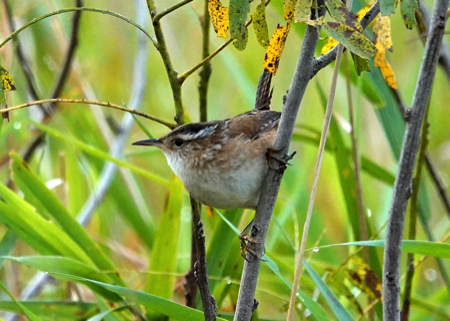 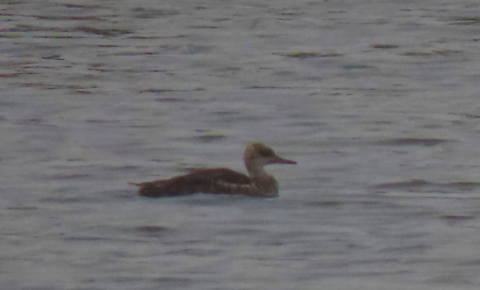 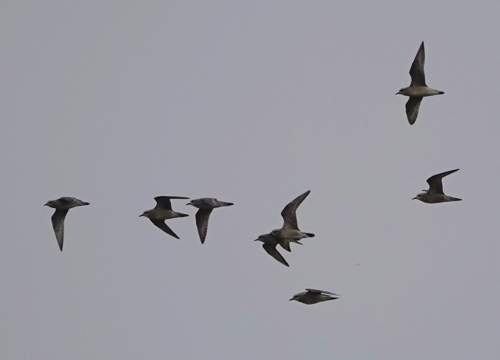 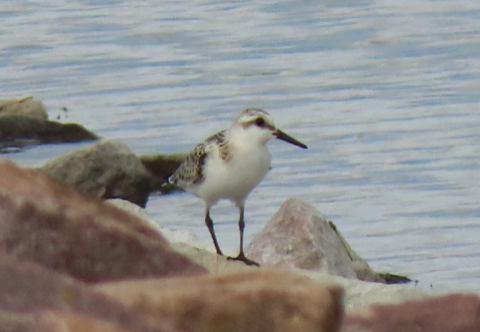 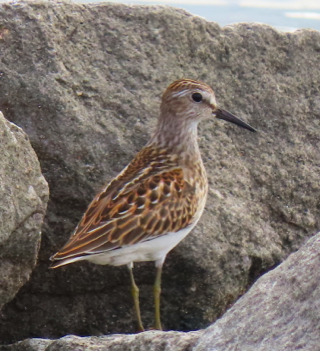