It was fun to finally get the 2020 MBW season under way! With masks in place, we met bright and early at the usual meeting location for an MBW – the Fergus Falls Perkins. And what better place to begin the 2020 MBW season than the prairies and Impoundments in western Minnesota. While the recent rains left North Ottawa full of water, we did find a small dry area on the north end that had a nice mix of 10 shorebird species, including Stilt Sandpipers and a Short-billed Dowitcher. We also hit a couple of local parks and managed to find a few woods birds in those. Our tally of 94 species was nice for a warm summer day, with only a few migrants around at the time.

With somewhat cooler temperatures during our two days of birding in Otter Tail, it made for a pleasant birding experience. We were able to spend some time hiking at Maplewood and Glendalough state parks. Grotto Lake in Fergus Falls was interesting with a large number of immature Black-crowned Night-Herons roosting in the spruce trees and the large egret and cormorant rookery was fun to observe. The Least Bittern was cooperative at Erhard WPA, and we added a Scarlet Tanager, Blue-gray Gnatcatcher, and a great view of the county at Inspirational Peak. Nancy and I ended the trip at the Parkers Prairie WTP, our 8th sewage pond of the trip.

While our 7 and 8-car caravans and 6-foot social distancing made it challenging at times, our 120 species tally for the three days was quite pleasing for a mid-summer MBW.

following the summary of the 2021 MBWeekend

Our amazing run of good luck with the weather this summer partly came to an end in Ferg. For me and others, it was hot/humid enough on Thursday afternoon so that we quit early and had time for a welcome break before an early dinner. At least the pre-MBW Wednesday afternoon stayed in the 70s, below the mid-80s forecast, and on Friday we left town before the heat of the afternoon arrived. (Of course, Craig had to wear his down jacket through all this to prevent hypothermia.)

No matter what you thought of the weather, I think we’d all agree that the birding was better than expected. Normally you can’t assume you’ll find that much at this time of year, since most nesting birds have stopped singing, and – except for shorebirds – fall migrants haven’t arrived yet. So to come up with 119 species in all is fairly impressive, especially considering the drought didn’t help matters.

Among the highlights was our total of 15 shorebird species, including the 6 American Avocets at Mustinka WMA, the 2 Buff-breasted Sandpipers landing in a Traverse field next to North Ottawa impoundment, and the pre-MBW’s Red-necked Phalaropes at Osakis sewage ponds. While 15 shorebirds is normally not all that significant, there weren’t that many mudflats (even North Ottawa only had one small area of mudflats with 10 species), and no one else had been seeing that many shorebirds anywhere else in MN.

Some of our other good finds were: a juvenile Black-billed Cuckoo on the WPA trail in Ferg; the heard Common Gallinule at Neumann WPA (or, as it’s said on Seinfeld, “Neumann!”), which Kevin saw on his way home Friday; a leader-only, fly-by Least Bittern on Friday; singing Alder (in Otter Tail) and Willow (in Grant) flycatchers; a few late migrant Bobolinks; and an apparent family group of Orchard Orioles at Orwell WMA. We were entertained by several baby birds as well (aw!), including both Red-necked and Western grebes at Lake Osakis, that black Virginia Rail chick (at Neumann!), and fuzzy Willow Flycatchers being fed by mom at Ash Lake. (But where were the Savannah Sparrows?! ...They’ve been scarce to non-existent on all 4 of this summer’s MBWs. 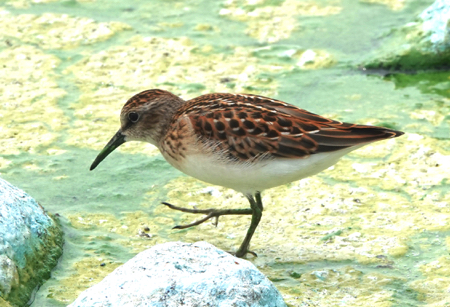 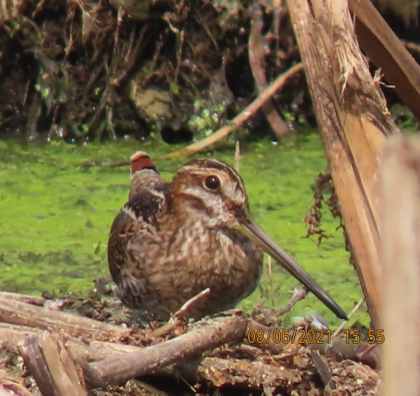