So, once again, your spineless, wishy-washy tour leader announces: "Let's blow this hellhole!" (See "MBW Glossary of Terms" quiz.) And, once again, even though he's been at this for 30 years, we have a glaring example of why he (front row, second from left) keeps trying to fire Craig (orange jacket, leaning forward). It seems that Craig knew what to do as the rain became relentless on Monday morning. He had listened to Ben Wieland and knew that Cass County was no hellhole. So as YSWWTL abandons all hope and heads for Duluth's Park Point with 9 other misguided MBWers, he only manages to add 3 species to the list. Meanwhile, of course, Craig and Ben and the other faithful manage to add 8 new birds back in Cass County – including an amazing group of 5 Whimbrels in a field along CR 112! Just for that, Craig, for making me look bad, and for the 259th time, you're.... Oh, never mind.

Despite the rain which split us up prematurely on Monday morning, the weather was quite decent and we came up with a respectable total of 153 species overall. (And if you add in the 23 other species found only on the Stearns pre-MBW, we had a composite total of 176 during this 4-day weekend.) Most of the 13 shorebirds on our list were heading north, but there were very few other migrants, so we had a nice assortment of locally summering residents. Besides those completely unexpected Whimbrels, this special MBW's highlights included an out-of-range Eared Grebe at the Cass Lake sewage ponds; the excellent views of Eastern Whip-poor-will (atop the cabin's LP gas tank), American Woodcock, and even a Porcupine on Sunday evening's excursion; and 22 species of warblers.

I hesitate to express here some acknowledgments and thanks to those who helped make this 30th-Year Reunion such a success, because I'm bound to forget someone. But leading the list have to be our hosts at Deep Portage: Molly, who coordinated all the meals and lodging; Dale, who not only helped coordinate our birding itineraries, but also serves as Deep Portage's Executive Director; Ben W, who also coordinated the birding routes (and we'll miss him as he moves to Oregon); the other Ben (Jacques), who assisted with the field trips; and, of course, Lily the DPLC staff Husky. Because of their efforts on our behalf, I sent a portion of your MBW fees ($156) as a contribution to Deep Portage.

I again recognize and thank Dave Johnson and Rick Hoyme for leading the list in all-time MBWeekend attendance. Although Dave narrowly edged out Rick by just 3 MBWs, note that Dave had an advantage by having his pre-MBWs counted (and pre-MBWs mostly began after Rick's years of peak attendance). Perhaps a recount is in order?

I especially thank Bob Bossert for donating the MBW flashlights which shed renewed light on our inspiring MBW motto. His brother Steve also donated some matted photos from Chicago as door prizes. I'm grateful to "Wrong Way" Charlie who only got lost three times during the weekend but found his way back in time to act as MC during part of Sunday evening's program.

Congratulations again to Cindy & Chris and Linda who managed to decipher the most MBW idioms on the quiz. I thank Matthew for choosing this Reunion to attend his very first MBW (so which sewage pond did you select for your baptism into the MBW community?), and I thank all those who shared their photos with the other participants.

And, of course, it goes without saying that Craig has been a huge part in making MBWs what they are today. Words can't adequately express my thanks to him for enduring my somewhat tyrannical views on labor relations, for showing us that flipping around is an essential car-caravan maneuver (and not just some rude circular gesture), for teaching us to appreciate the fine cuisine at Applebee's, and even for his misguided efforts to show us the proper pronunciation of "Eye-talian" restaurants. So because I can't find enough words of thanks here, I'll just say: Craig, don't forget the appointment I made for you at the Eye Clinic next door to that Italian place in St Joe – maybe they'll finally cure you of that irritating speech impediment!

Finally, I have to thank all 8,000 of you who have registered for these MBWs during these 30 years. We couldn't have survived and succeeded over three decades without our essential traditions of car-pooling and GMRS radios (and remember CBs?), and you were the ones who were instrumental in making them work. More importantly, so many of you truly served as unofficial co-leaders on these MBWs as you spotted so many birds and helped the other participants with seeing and identifying them. And, perhaps more importantly, you have been willing to go along with just enjoying our casual approach to birding, to not take ourselves too seriously, and to have a sense of humor about it all – even when my somewhat bizarre attempts at humor fall flat. You all deserve a Junior Tour Leader Merit Badge.

Thanks again for being part of our 30-year-old MBW community. I don't know if we'll make it to 40 years – or even 35 – to have another Reunion, but I do know that all this over the years has become the most important thing I've ever been a part of....

Note that there were just too many of us to fit within a single photo.

Among others, Craig is missing  – but it doesn't really matter since he had just been fired...

Needless to say, it was quite a memorable weekend! While I was surprised by the composite list of 151 birds found within Cass Co, since there were essentially no migrants or unexpected rarities, Ben says he was not at all surprised by this diversity in his home county during the breeding season. (Note there were also 7 Morrison County-only species on Friday, for a grand total of 158.)

I suppose our most unexpected find was that family group of Red Crossbills which provided a grand finale to the MBW on Monday. Two-thirds of our group was there to see them (Craig's group was birding elsewhere – grounds for immediate dismissal, of course!), including that nice adult male which eventually teed up nicely.

Both of our evening excursions provided special highlights as well – at least for those still awake enough to take advantage of them! I was especially impressed by the number of Nelson's Sparrows that Ben & Craig & company heard at the Boy River on Saturday. On both evenings at Deep Portage, visible Barred Owls certainly entertained us, while invisible but vocal Whip-poor-wills were easily heard. And our excursion Sunday evening to Swamp Lake turned up a Barred Owl posing on a highway sign, a visible Nelson's Sparrow, and calling Yellow Rails – including one which a few of us even glimpsed as it fluttered off into the dark.

There are so many I'd like to thank for contributing to the success of this special MBW Reunion, and I hesitate to do so since I'm sure I'll forget someone worthy of mention. Of course, Craig deserves special thanks for his co-leading skills – just as he has on 49 previous MBWs. And without Ben & Molly & Dale at Deep Portage, of course, none of the meals, lodging, and birding would have been possible. Certainly, nothing I could say here could adequately express how special these four people are.

Many others also made special contributions: Dorothy (and her anonymous benefactor) for generously providing our MBW hats; Barb for compiling the unique album containing your thoughts and photos (if you still have prints to include post-MBW, contact her at bgakre@msn.com); Robin and "the girls" for the anniversary cake; Audrey for her efforts as staff photographer (a CD of images may be a possibility; contact her at alynneretired@yahoo.com); Rick and his "Wanted Poster"; Dan & Sandy and their puzzles (contact them at thimgan@digitaljam.com for the answers); Dick H, Bob B, and Bonnie & Charlie who contributed special evening anecdotes for the group), and those who presented me with gifts large and small....Audrey, Conny & Susan, Mary G, Steve/Julie/Bob (for the Garmin), and Ben/Molly/Dale (for the framed Golden-crowned Sparrow photo).

Again, my thanks to those I may have forgotten to acknowledge, to all of you who were able to be a part of this event, and to all 5,704 registrants who have been a part of the MBW community since 1986. And here's to our next 25 years! 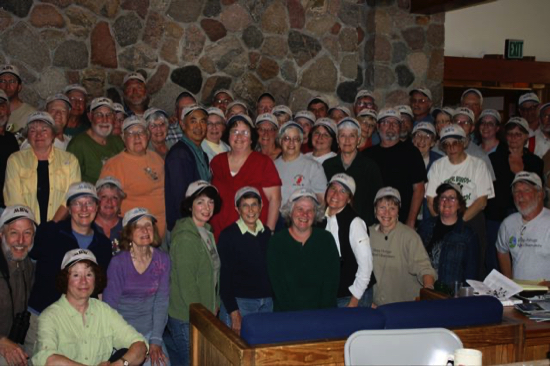 The “badge” was salvaged (thanks to Kathrynne & Paul Baumtrog) from Nancy’s Subaru which collided with a deer on the January 2021 Duluth MBW. (Nancy’s car had also been hit by a driver running a stop sign during the virtual April 2020 MBW.) Jeff had been temporarily blinded by the sun as he passed a group of MBWers birding on the road near Deep Portage and managed to miss them all – such heroism certainly deserves to be rewarded! (That’s your Spineless Wishy-Washy Tour Leader in the center managing to get in the way of the presentation.)

There were certainly other highlights during our 3-day MBW in Cass County and based at Deep Portage Learning Center (DPLC). Although the optional Duluth pre-MBW on Friday was pretty disappointing, we found birds of interest almost everywhere we went in Cass Co. The weather even cooperated every day (unlike most MBWs) with cool to moderate temperatures, generally light winds, and no rain fell while we were out birding.

We managed to find 151 species on the main MBW (plus 4 others unofficially on the pre-MBW), even though there were just a few spring migrants still around to enhance our list. Besides a few shorebirds, the only migrant we saw not breeding in Cass was Olive-sided Flycatcher. This total of 151 includes 3 species not found in Cass (Am. Woodcock in Itasca; Blue-headed Vireo and Field Sparrow in Hubbard), and is about the same total as on our two previous Memorial Day Weekends based at DPLC.

Among the best birds...a non-countable Chukar from some game farm (see Matt’s photo below)...an Eastern Whip-poor-will seen and not just heard – and even photographed by Roy (see below)...a nesting pair of Red-headed Woodpeckers...both Yellow-bellied Flycatcher and Connecticut Warbler along the same road on Saturday (though neither cooperated on Monday)...a pair of Orchard Orioles (which would be a first breeding record for the county if they decide to nest)...and a total of no fewer than 19 warbler species. And in case you’re wondering if we would have found Yellow Rail or Nelson’s Sparrow had we offered an evening option to the Boy River or Swamp Lake – probably not. Dale tried both spots unsuccessfully on the next 2 nights.

• (species) = only seen on Duluth pre-MBW

following the summary of the 2021 MBWeekend 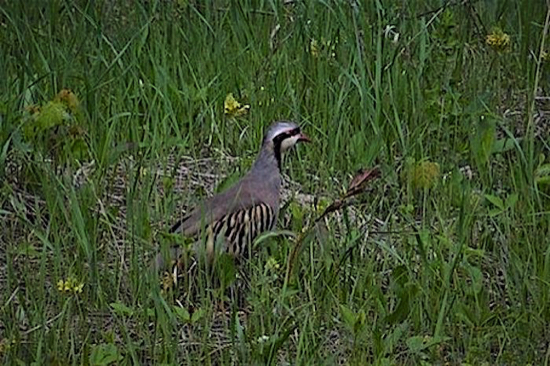 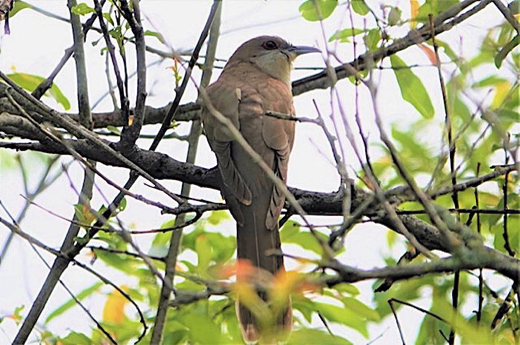 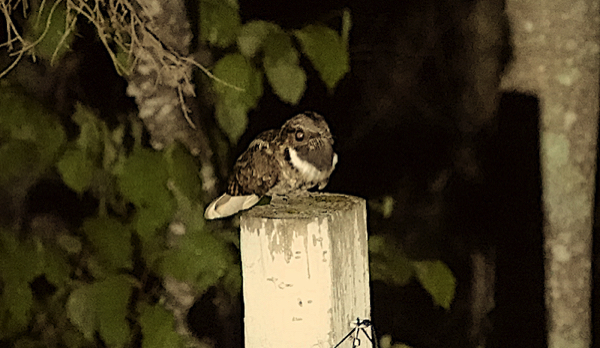 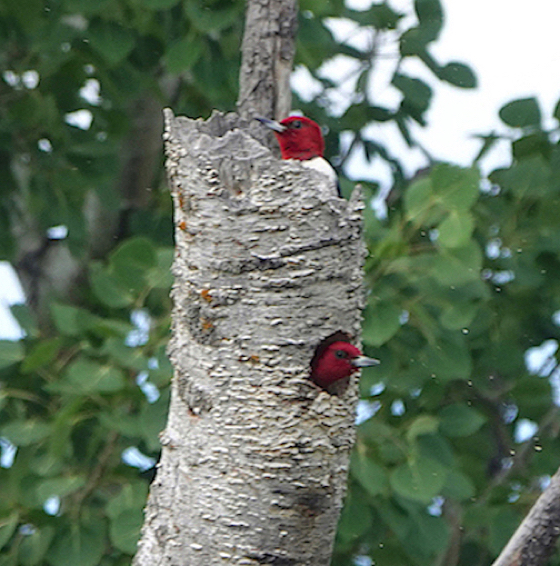 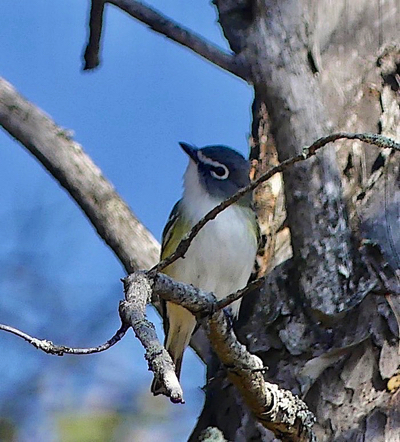 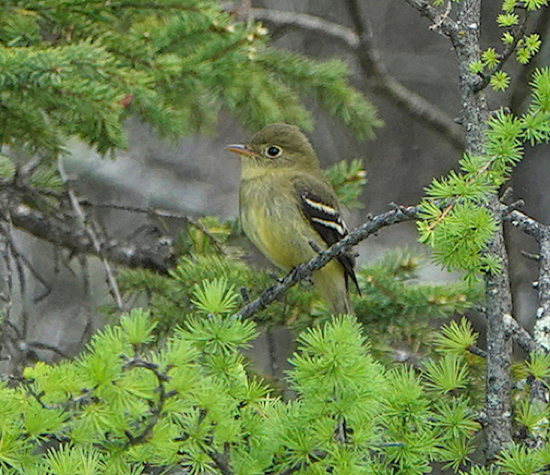 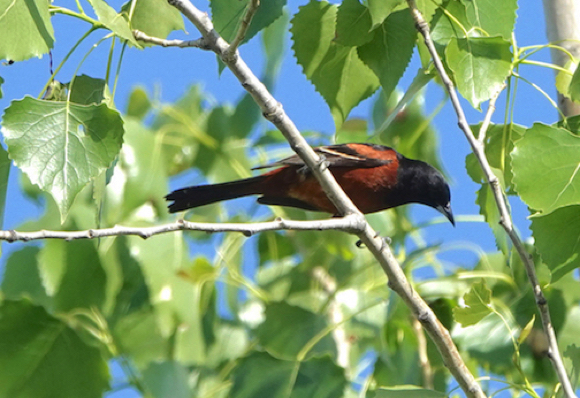 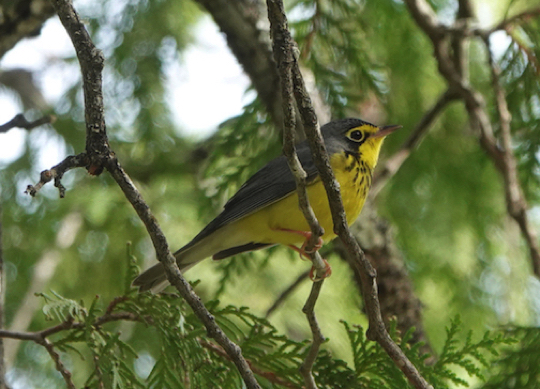