Well, I think we made the right choice by going birding rather than to the Kenny Chesney concert! (See below for an incident involving someone from Ada; thanks to ace investigative reporters Dan & Sandy for this news item.) Of course, the MBW's highlight was our experience at Gary Pines Wayside with that apparent hybrid family group of wood-pewees, which seemed to include at least one "pure" Western! (Other observers there through yesterday concurred with this identification, but we'll have to see what MOURC has to say.) It's just too bad the weather then was counterproductive so that more of you weren't able to see and hear all that Ron, George and I did by staying later.

Otherwise, the weather was pretty cooperative all three days, considering it wasn't too hot or windy, and many of us were treated to an especially pleasant Saturday evening. And there were several other birds of note, especially those Gray Partridges, still-booming prairie-chickens, baby loons and grebes, good looks at rails, several cuckoos, a surprising Barred Owl by day, a vireo nest and Scarlet Tanager together on that devious county line, Lark and Le Conte's sparrows, and those good-looking Chestnut-collareds at Felton.

Gray Partridge     C (a pair at Felton spotted by Doug)

Greater Prairie-Chicken     NC (some unexpectedly still booming in both counties)

Yellow-throated Vireo     NC (plus one on a nest on the Otter Tail/Clay Co. line spotted

Chestnut-collared Longspur     C (as handsome as ever at Felton)

Well, I picked a fine time to lose my hat and neglect to get a haircut. Saturday's high of around 90 degrees coupled with high humidity (the dewpoint was in the mid-70s) resulted in a heat index of 100 or so, and along with sustained 25+ mph winds it made for some birding difficulties. No wonder I was unable to spot that Say's Phoebe with hair blowing across my eyes. But no one else could find it either during the MBW, although Tod had photographed it early Friday evening, and the phoebe appeared for Rick early Sunday afternoon after his 45-minute vigil – and a few of you saw the family group in Traverse Co on the way home.

At least the weather was much more pleasant for those on Friday's pre-MBW (in the 70s with light winds), while on Sunday morning the wind had moderated and the MBW adjourned before the heat returned in the afternoon. So we still managed to find a respectable total of 132 species in all, with around 110 in both Becker (better weather, more woods birds) and in Clay (where we had more time and more grasslands).

Among the highlights, there were Eurasian Collared-Doves, Lark Sparrows, and Dickcissels found in both counties. On Friday, some of Becker's more notable birds were Red-necked Grebes, a "fall" migrant Lesser Yellowlegs, Sharp-shinned Hawk (usually breeds farther north), Merlin, great looks at a LeConte's Sparrow, and both Northern Parula and Pine Wabler at Tamarac NWR. And in Clay County: a serendipidous pair of Gray Partridge, an unexpected Ruffed Grouse drumming (heard by some), several adult and young Greater Prairie-Chickens at Felton, a pair of Eared Grebes, a high-wire act by a blowin'-in-the-wind Upland Sandpiper, a mama Marbled Godwit with young, migrant Least Sandpipers and Greater Yellowlegs in a modest mudhole, Western Kingbirds and 3 Loggerhead Shrikes at Felton, and Blue-gray Gnatcachers and a singing Eastern Towhee at Buffalo River State Park (both rare in Clay).

...And, sadly enough, this MBW may have been a part of Minnesota ornithological history: we documented the apparent demise of the decades-old tradition (since at least the 1950s) of Chestnut-collared Longspurs nesting at Felton Prairie. Although there was a handful of sightings in May of a lone individual, so far this marks the first summer ever when there have been no reports at all of this species. Unless something turns up later this summer or perhaps next year, one of the few quintessential specialties of Minnesota birding is now history. (I still remember the DNR survey I did in July 1980 when I counted 65 singing male Chestnut-collareds here...) 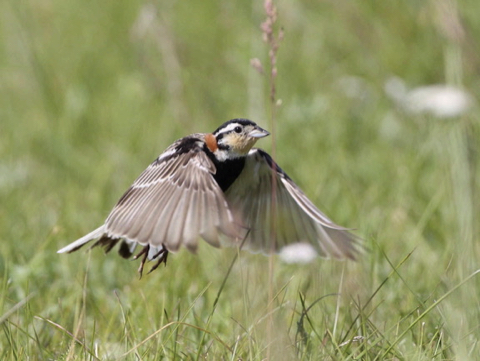 Note that other counties besides Clay were included on these MBWs.

Nancy tried her best, but that Laughing Gull she had found a couple days earlier in Detroit Lakes failed to reappear for our pre-MBW; and no one was able to relocate it since the day before. But the Northern Mockingbird in Randy and Sue Ness’s yard northwest of Hawley appeared right away for us on Friday afternoon, with arrangements for our visit made possible by Pat Beauzay. We were even able to watch its curious “ant-ics” for several minutes. We next went on to hear an unexpected Alder Flycatcher, followed by a Red-necked Grebe at Flora Lake.

But our luck ran out the next morning at Felton Prairie, as we had to admit that Chestnut-collared Longspurs are no longer nesting there or anywhere else in MN – a big loss in the history of Minnesota ornithology. The Say’s Phoebe was also a no-show, nor were there any shrikes to be seen (another potentially extirpated MN breeding species?). And where were the godwits? Meanwhile, a misleading warning light in Jeff’s vehicle led to a nearly flat tire, as he had to run all the way back to Fargo to get that repaired.

At least there were several positives during our visit to Felton, as our only Western Kingbird was spotted by Linda S in its preferred grove of trees, two groups of Greater Prairie-Chickens flew by as we drove up the former longspur road, Grasshopper Sparrows were singing everywhere, a pair of Upland Sandpipers put on quite a distraction display that certainly caught our attention, and the local Lark Sparrow was found twice.

Things predictably slowed down a bit in the afternoon, although we found a group of Sandhill Cranes (a couple was distantly seen earlier at Felton), and Linda M briefly heard a LeConte’s Sparrow (Deb and I probably heard it too), though it refused to respond for the rest of the group.

Sunday’s highlights included a heard-only Yellow-billed Cuckoo that sounded off for part of the group at the state park, and a briefly-seen Black-billed at Bluestem Prairie. But we also had decent looks at a few prairie-chickens in a cropfield, excellent views of another Upland Sandpiper doing its best to distract us, and Dickcissels continued to sing in several places as they had the previous two days.

We finished this MBW with a respectable 113 species, with all but 2 of these in Clay County (Forster’s Tern and Purple Martin were Becker-only birds). Part of this success was due to the favorable weather, since the temperatures were moderate, we basically avoided any rain while birding, and the prairie winds were curiously conspicuous by their absence. (That makes 3 consecutive MBWs with favorable weather, so those signed up for the Mankato and Fergus MBWs – beware.)

Black-billed Cuckoo (fly-by and perched only briefly at Bluestem)

Osprey (nesting on the tower en route to the mockingbird)

Broad-winged Hawk (a molting immature near the landfill)

Western Kingbird (at the “usual spot” at Felton)

Northern Mockingbird (thanks to Pat, Randy, and Sue!)

Leconte’s Sparrow (heard-only by Linda M, and possibly Deb & me)

Dickcissel (lots during this irruption year) 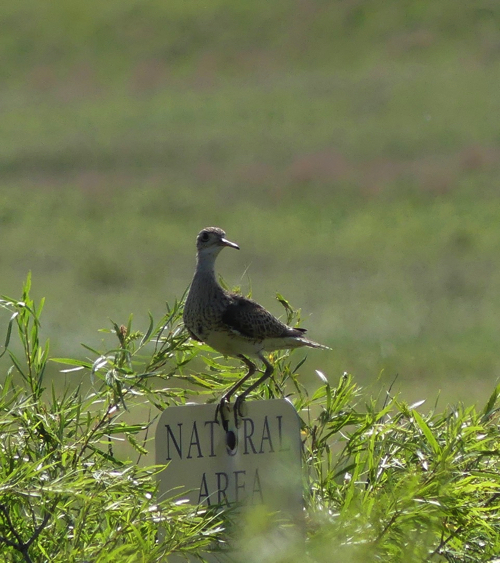