Yes, the weather was certainly about as pleasant as one can expect on this MBW, with temperatures approaching 65 degrees on Saturday afternoon, and with the low 50s and virtually no wind on Sunday morning. Surprisingly, though, this wasn’t the mildest November North Shore MBW ever. I had forgotten that it hit a record high of 74 in Duluth during this MBW in 2020, and the highs were 60+ on each day. And the weather in 2009 was about the same as what we had last weekend.

This balmy weather almost made it irrelevant that this has been one of the slowest fall migrations ever, both here and throughout most of MN. Our total of 52 species was clearly lower than we usually have on this MBW, although our composite totals were even lower in 2016 (49 species) and 2013 (50). By the way, our average species count is around 60, and we managed 70+ species in 2008 and 2017. Examples of our modest species total this year were the very low numbers of American Robins and Snow Buntings, the abundance of mountain ash berries with virtually no birds in them (we never did see any Bohemian Waxwings), and the near-absence of late-lingering migrants (like sparrows).

These disappointments, though, pale in comparison with the overwhelming – perhaps unprecedented? – flight of hundreds of both Common Redpolls and White-winged Crossbills we witnessed both days. Actually, the word “thousands” probably describes it better, as I don’t remember ever seeing as large a movement of these species. Other highlights were that sort-of-a-Ross’s and Cackling geese in Two Harbors, the Harlequin Duck still lingering in Grand Portage, White-winged Scoters at 3 locations in all, and the adult male Black Scoter for those still with us Sunday afternoon at Park Point.

Among the notable things we saw among the land birds were the Red-bellied Woodpecker in Knife River and another in Two Harbors (we see 0 on most North Shore MBWs), a couple of Lapland Longspurs landing in trees (something I don’t recall ever seeing before!), all those Rough-legged Hawks along Hwy 61(including that handsome and photogenic dark-morph bird near Taconite Harbor), and a Northern Shrike near the Grand Portage sewage ponds.

It was certainly more like early October than November, as each day was mostly sunny with high temperatures ranging from around 60 into the low 70s. On Friday the 6th, it even hit 74 in Duluth, a new record high by 4 degrees! As I told both groups, the only thing I could figure was that on the first Sunday of November, when we were supposed to just set our clocks back one hour, something malfunctioned and both time and the temperatures were set one month earlier instead. The only day with more November-like weather was on Saturday when it was mostly overcast, the wind shifted to the east off the lake, and temperatures fell back into the 40s by the afternoon.

The only problem with such “Indian summer” weather is that the movement of migrants typically comes to halt, and the birding can then become quite slow at times. Such was certainly the case during much of each day, but no one seemed to mind given the unusually pleasant weather.

Probably the best bird enjoyed by both MBWs was the female-plumaged Harlequin Duck at Stoney Point. Both groups were also able to see all 3 scoters, Long-tailed Duck, late Wilson’s Snipe at a few locations, Bohemian Waxwings, both Evening and Pine grosbeaks, White-winged Crossbills, a few meadowlarks (probable Westerns), and that frustrating, distant loon at Stoney Pt. – this was IDed by others as a Pacific, though it looked like it had some Common-like features and I decided to leave it as unidentified.

MBW I had a higher species count (63 vs. 55), and 16 of them were not seen by MBW II; these included Cackling Goose, a possible N. Goshawk, the crabapple-eating Red-headed Woodpecker in Grand Marais, and several late-lingering migrants – e.g., American Pipit, Fox and Savannah sparrows, Rusty Blackbird, and Orange-crowned Warbler. MBW II came up with 8 species which MBW I missed, and these included a Red-necked Grebe and late Eastern Phoebe at Stoney Pt., a brief Northern Shrike in Knife River, both kinglet species, and mostly-heard Red Crossbills flying by in Two Harbors.

Thanks to all for coming, despite the risks involved with traveling during the ongoing pandemic. Though some had understandably canceled, there were enough of you interested to get me out on my first MBWeekend since last January, as I co-led with Craig on Thursday and Saturday (while Dave Benson was with Craig on Friday and Sunday).  –KRE 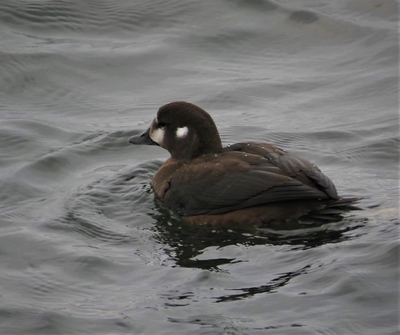 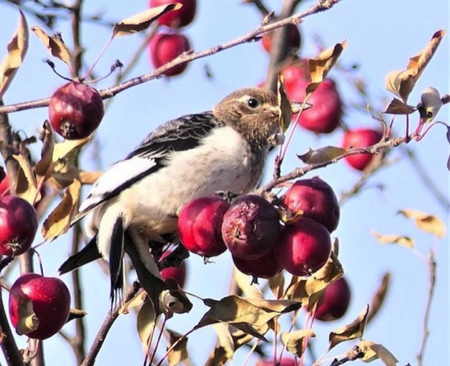 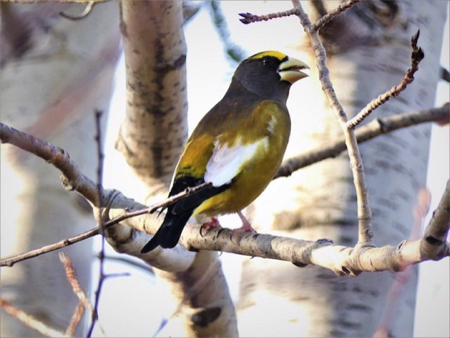 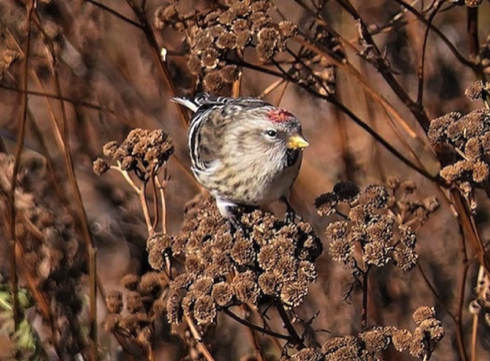 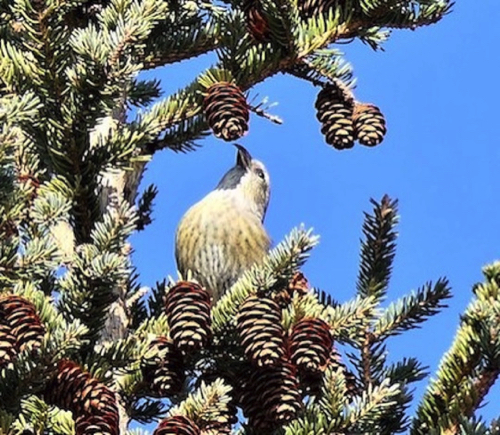 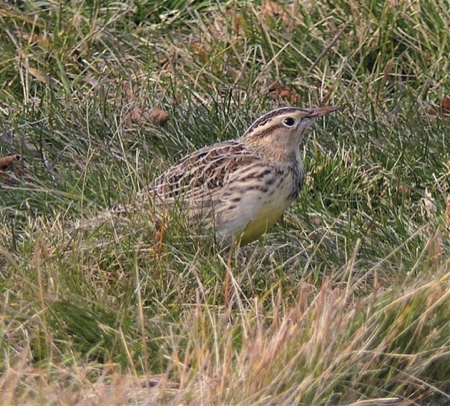 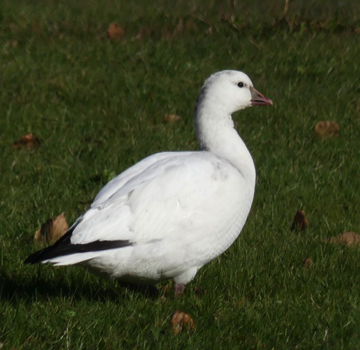 Ross's Goose (or hybrid?): present in Two Harbors since September 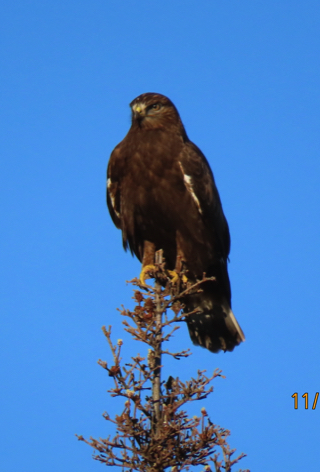 near Taconite Harbor, one of several migrants along Hwy 61 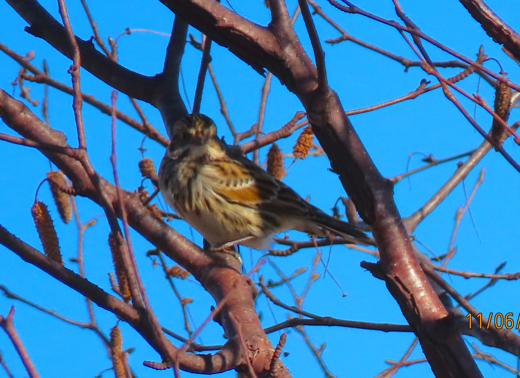 Lapland Longspur: one of two that perched repeatedly in trees (!?) in Two Harbors

White-winged Crossbills: one of 100s migrating down the North Shore

Thursday’s pre-MBW at Mille Lacs Lake is best summarized by Craig... Our starting point at Cove Bay worked out well for the Mille Lacs pre-MBW. There, we had a few species of waterfowl, Wilson’s Snipe, Killdeer, Northern Shrike, and Purple Finches, as the weather was calm, sunny, and around 50 degrees. We then headed east and checked a few more public accesses and Father Hennepin State Park, adding a few species at each stop. After lunch, we birded up the west side of Mille Lacs and saw a few more species of waterfowl, including especially a pair of Black Scoters – plus an unusual-looking “water bird”, which was finally identified as a swimming Black Bear. Around 2:00, a light rain started and made viewing difficult for the remainder of our day, but our 52 species was great, surpassing the previous Mille Lacs County November big day by 11 species.

While the species lists on Friday’s pre-MBW and on the main Saturday-Sunday MBW were not as high as at Mille Lacs, our four-day cumulative list reached an impressive total of 72 species, and we did manage to see several noteworthy birds. As on Thursday afternoon, the weather was less than cooperative, especially with NE winds and light rain on Saturday afternoon and Sunday morning in Grand Marais, and we faced very strong SW winds as we birded our way back to Duluth on Sunday.

Still, our list of highlights on Friday’s pre-MBW included such finds as a late Ruby-crowned Kinglet and our only Rough-legged Hawk (though just a distant going-away look for most) at Brighton Beach; a meadowlark (most likely a Western) and a late Harris’s Sparrow, both at Stoney Point; a great view of a low-flying adult Golden Eagle directly over our heads at Knife River (see photo below), along with a late Gray Catbird; and a Northern Shrike in Two Harbors.

Then on Saturday-Sunday’s excursion to Grand Marais and back... There was a lone Black Scoter with 5 White-wingeds at Taconite Harbor (plus another unidentified scoter that might have been a Surf); the Harlequin Duck finally emerged into view after our long search in the Grand Marais harbor; a couple more White-winged Scoters were also in Grand Marais, but the 3 fly-by Long-tailed Ducks (the only ones all weekend) were missed by most; 3 more “Western” Meadowlarks were in Grand Marais as well; we found no fewer than 4 Northern Cardinals in Cook County (Grand Marais, Lutsen, and 2 in Tofte – we normally see none); and we ended our birding Sunday afternoon in Two Harbors with Snow Geese (both blue and white morphs), a juvenile Ross’s Goose, Cackling Goose, and a nice look at a late Merlin, all at the golf course.

In between these highlights, though, we found the migration to be generally lackluster, as it has been in Duluth and the North Shore almost all fall. Note, for example, the relative (or nearly total) absence all season of Long-tailed Ducks, uncommon/rare gulls, loons, goshawks and Rough-leggeds, Black-backed Woodpeckers, Bohemian Waxwings, bluebirds, winter finches, Harris’s and other sparrows.

Thanks to all for coming on these MBWs, and especially for your patience during the times when too much weather or not enough migration were prevailing. And, as always, we thank Craig for his guiding services – this time at Mille Lacs Lake.